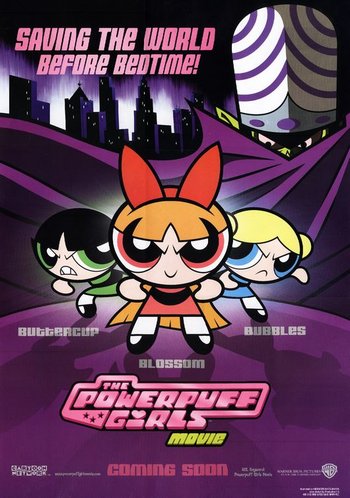 "You said to give everyone a little time to understand our specialness. Well, now it's time for everyone to understand, especially Mojo!"
— Blossom
Advertisement:

The Powerpuff Girls Movie, released in 2002, serves as an origin story for the titular girls, showing not just how they got their powers but how they came into their own as crime fighters. To date, it is the only feature film to be spun off from a show produced in-house by Cartoon Network Studios.

The first few minutes show things going as they do in the opening sequence—using sugar, spice, everything nice, and an accidental dose of Chemical X, Professor Utonium brings his daughters into the world, as well as unknowingly imbuing his primate assistant Jojo with enhanced intelligence. After a disastrous game of tag wrecks their home, the City of Townsville, Utonium is carted off to prison, leaving the girls to wander the streets. Jojo finds the girls, takes them under his wing, and has them help build his base as well as a secret machine, having convinced them he only wants to help make the City a better place. Naturally, disaster ensues and the girls have to find a way to make things right.

Blossom uses a shortcut to tag Bubbles during a destructive game of Tag and gives her one more thing to put shame on her.

Example of:
Blowing a Raspberry

Blossom uses a shortcut to tag Bubbles during a destructive game of Tag and gives her one more thing to put shame on her.