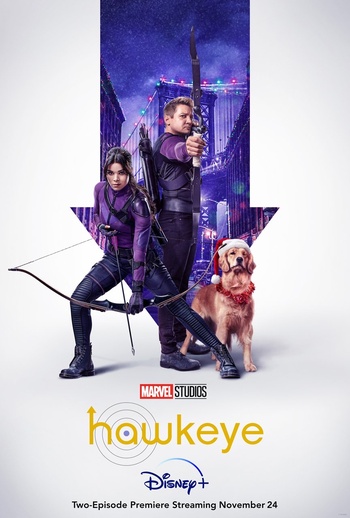 This holiday season, the best gifts come with a bow. note  From left to right: Kate Bishop, Clint Barton, and Lucky the Pizza Dog.
Eleanor Bishop: So Kate is helping you with an Avengers-level threat?
Kate Bishop: He's my partner.
Clint Barton: That's kind of a stretch...
Advertisement:

Hawkeye (stylized as hawkeye) is a superhero action buddy crime miniseries created for Disney+ by Jonathan Igla (Mad Men, Sorry For Your Loss, Bridgerton), based on the Marvel Comics character of the same name. It is the 31st overall entry in the Marvel Cinematic Universe, the eighth installment in Phase Four, and the fifth MCU series produced by Marvel Studios. Rhys Thomas (Brian Pern) and Bert & Bertie (Troop Zero) are the directors of the series. The series takes inspiration from Matt Fraction (who is also credited as a Producer/Creative Consultant on the show) & David Aja's beloved 2012 — 2015 run of Hawkeye, borrowing its logo and incorporating many of its characters and themes, while its promotional material much has very much been styled after Aja's art.

It's the most wonderful time of the year, and Clint Barton (Jeremy Renner) just wants to spend the holidays with his family after the grueling events of Avengers: Endgame. However, after the enemies Clint made during his five-year stint as the vigilante Ronin resurface in New York, Clint must team up with the young archer Kate Bishop (Hailee Steinfeld) to deal with them, all while ensuring that he makes it home in time for Christmas.

The first two episodes of the series premiered on November 24th, 2021, with the remaining four episodes premiering every Wednesday through December 22nd - fittingly just three days before Christmas. A self-titled spinoff starring Cox's Echo is also currently in development, and set to premiere in 2023.

open/close all folders
Tropes A to G
Tropes H to Z
♫ We can do this all DAAAAAAAYYYYY!!! ♫
Feedback

Netflix's Wilson "Kingpin" Fisk as played by Vincent D'Onofrio, makes his leap from the Marvel Netflix universe, into the the Marvel Cinematic Universe proper. Though it's currently unknown if the events from his previous appearances remain Canon aswell.

Netflix's Wilson "Kingpin" Fisk as played by Vincent D'Onofrio, makes his leap from the Marvel Netflix universe, into the the Marvel Cinematic Universe proper. Though it's currently unknown if the events from his previous appearances remain Canon aswell.