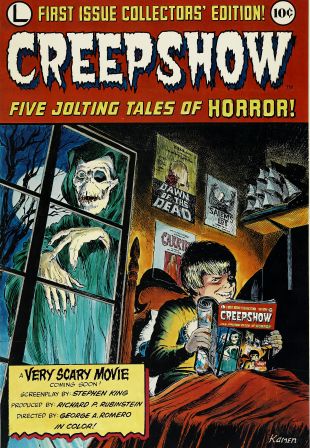 The Most Fun You'll Ever Have...BEING SCARED!
Advertisement:

In addition, the movie also has a
Advertisement:
Framing Device of a young boy named Billy (Joe Hill) who reads the eponymous Creepshow comic while enduring abuse from his father, Stan (Tom Atkins). Thankfully, Billy manages to get the last laugh.

It had a less well-received (but still mostly good) sequel, Creepshow 2, which was followed by the unofficial and nowhere near as popular Creepshow 3. The film would inspire other EC Comics-style horror anthologies such as Tales from the Crypt and Tales from the Darkside.

. In addition to more adaptations of King himself, the series also boasts stories from Joe Hill, Joe R Lansdale, Josh Malerman, and more.

Creepshow is the Trope Namer for:

"The most fun you'll have being troped":