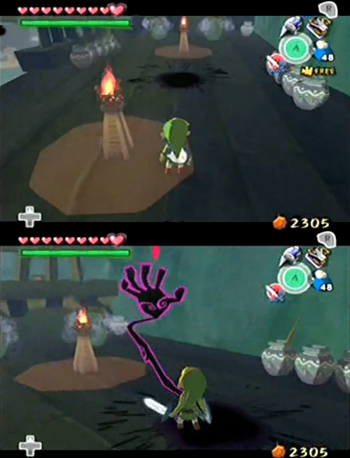 Ambushing Enemies are creatures that hide in the environment and never fully appear until you walk close to them, at which point they suddenly lunge out and attack you. Most usually hide within walls, floors or ceilings, sometimes in holes and sometimes just melding in and out of solid matter; other examples may instead hide in shrubbery, turn invisible, phase in and out of reality, or anything else that allows them to pass unnoticed until you're right on top of them.

These enemies can be extremely difficult to deal with, as you can't target them until you're within their attacking range. This is especially true when they guard narrow ledges or passageways, further restricting the space you have.

Subtrope of Stealthy Mook. For enemies that hide by disguising themselves as something benign that lures you into investigating it, see Chest Monster. In cases where Ambushing Enemies hid underground, they will often overlap with Mole Monster. Compare Living Structure Monster; there, the structure itself is the monster while in this trope, the monster hides inside the wall. Also see Empty Room Until the Trap and Whack-a-Monster.