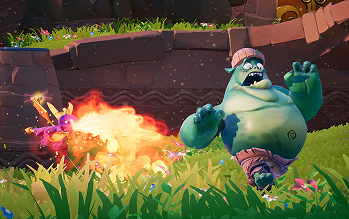 There goes the bravest man in the team.
Advertisement:

A type of Mook commonly found in video games. This is essentially the enemy equivalent of the Cowardly Boss: guys that (unlike most enemies) know very well that they don't stand a chance against you, so they decide to run away for their lives the moment you defeat enough of their allies, beat them up a little, knock off whatever armor they thought could protect them, or just get too close for their liking. Unlike a Cowardly Boss though, they're less likely to stop in their tracks to give you a chance to beat them down, but you're still free to try it if you're not feeling merciful enough.

These enemies often drop items of value or that you need to progress, encouraging you to go after them. In the latter case, this puts them in a prime position to be considered very annoying enemies, especially if they're good at running away and you can't easily trap them. Smarter examples will try to lure you into a trap or a room filled with more powerful enemies. Generally those guys won't put up too much of a fight when cornered, which is why they're often found in the early game. But there are exceptions, and sometimes they're even surprisingly powerful when forced to fight. This can make for Video Game Cruelty Punishment, at least if you didn't have to chase them to progress.

With the growing presence and popularity of the Morale Mechanic, this trope has somewhat become more widespread in modern games, however, you're more likely to receive an Instant-Win Condition from the deserters than the ability to chase and mow them down (and sometimes, they don't even flee at all).

Compare Metal Slime, which may flee from you as well, but is far harder and more annoying to find, let alone take down. The Bandit Mook is a Sub-Trope, becoming this once it manages to obtain whatever it wanted from you. Long Range Fighters may also exhibit similar behavior, under the justification that they're trying to find a better aiming spot and/or suck at close combat.