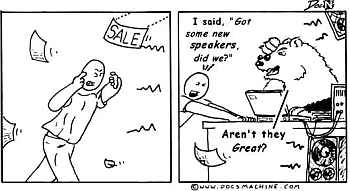 . Anyone who's been up close to the stage of a rock concert can tell how well they work when it gets loud.

This, though, is that feeling taken beyond what's possible in real life. A sound or series of sounds, if sufficiently loud, will push someone or something around as would the wind of a hurricane or tornado, well beyond what would happen in the Real Life. This trope is almost always played for laughs, but the Rule of Cool has it weaponized now and then as a type of non-standard elemental damage combining aspects of Blow You Away, Glass-Shattering Sound, and Explosion Propulsion.

Note, however, that this doesn't cover sounds that are genuinely that loud, like a rocket launch, nor does it cover giant monsters like Godzilla or King Kong roaring in someone's face, where their breath would come into play.

In Real Life, sounds loud enough to move objects are above decibel level 194. At this level, they are no longer sound waves moving through the air so much as they are shock waves pushing the air along in front of them. You don't want to be anywhere near a place where this trope is happening in real life. It's not a gale, it's a battering ram.

Contrast this trope to Brown Note and Loud of War, where the sound has a purely psychological effect on the target, as opposed to the physical effect of gale-force sound. See also Glass-Shattering Sound, where the effect is limited to glass. Make Me Wanna Shout has a similar effect, but only caused by a person's voice, and it's less frequently used for comedy, and Musical Assassin, who may use their music for this effect (but just as likely play Brown Note music).