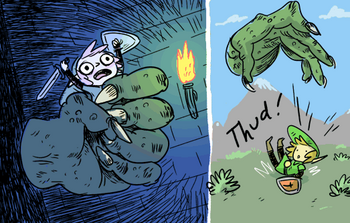 A monster that has the ability to teleport people against their will.

More often than not, this specific location is the beginning of a level or area, requiring you to go through the whole area you just went through again. Sometimes, however, it's a cell or other confined area, which you must then escape. If it's the whole area, these monsters are somewhat similar to Instakill Mooks.

This is not about when a Mook is a bouncer of a shady nightclub.