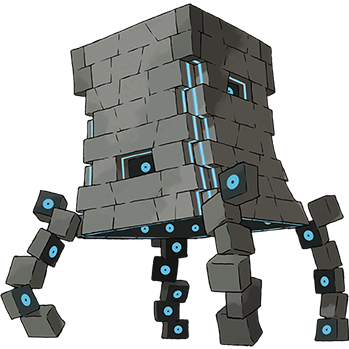 Forget Legos, these are REAL building blocks.
"It's like these people have never had a ceiling come to life and try to smother them before!"
— Belkar, The Order of the Stick

Sometimes Malevolent Architecture is taken literally, with monsters that are actually part of it. They take form of a wall, or a floor, or any part of the building you're in.

How would a wall, floor etc be such a menace? Maybe it is capable of movement, and would try to crush you by its own "bodies"; see Descending Ceiling, The Walls Are Closing In, Advancing Wall of Doom and Smashing Hallway Traps of Doom. When they aren't mobile, they may still be harmful by another means, such as shooting things at people or sprouting Spikes of Doom if someone's nearby. They may or may not have eyes.

If all those monsters are actually of one awareness, it overlaps with Genius Loci. This may also be one of the explanations behind a Mobile Maze.

Compare Wall Master for creatures who are able to move through/along walls; in this trope, the walls (and floors, ceilings etc) are the monsters themselves. Compare also Chest Monster, Womb Level and Our Gargoyles Rock (since a gargoyle is basically an animated rainspout). Contrast Smart House. Subtrope of Animate Inanimate Object.

If the Living Structure Monster is a boss, an overlap might occur with Background Boss and Stationary Boss, or alternately Advancing Boss of Doom.