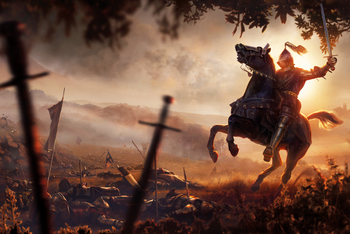 "There is only Total War..."
Advertisement:

Total War is a series of strategy games developed by Creative Assembly and published by Sega. The series combines Turn-Based Strategy with Real-Time Strategy and each game takes place in a distinctive historical period (except for Total War: Warhammer, which takes place in the entirely fictional universe of Warhammer Fantasy).

To date, there have been eleven installments in the series, with associated expansion packs:

In addition, there are several spin-offs:

The games' system is an interesting hybrid, with a continent-scale strategic turn-based game that jumps to real-time battles for resolving conflicts between opposing armies. The main campaign takes place on a "Risk"-Style Map divided into territories, cities, and fortifications. Here, the player manages their empire, selects construction projects for settlements, raises armies, hires and dispatches agents, conducts diplomacy, and marches troops around. When those troops encounter a hostile army or attack a settlement, the game zooms in to the conflict and loads a battle map, where the engagement plays out in real-time.

Battles in the Total War series are known as much for spectacle as strategy, to the extent that the History Channel used the Rome engine to provide visuals for a series on noteworthy Classical Era battles, and The BBC used the same engine for the Game Show Time Commanders.