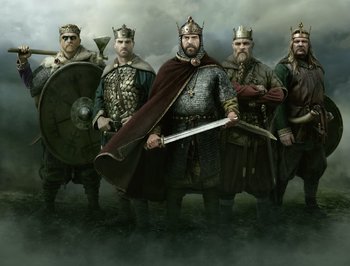 Only one can rule...

The year is 878 AD, the embattled Anglo-Saxon king Alfred the Great has mounted a heroic defense at the battle of Edington, and blunted the Viking invasion. Chastened – but not yet broken – the Norse warlords have settled across Britain. For the first time in nearly 80 years, the land is in a fragile state of peace. Throughout this sceptred isle, the kings of England, Scotland, Ireland and Wales sense a time of change approaching; a time of opportunity. There will be treaties. There will be war. There will be turns of fortune that become the stuff of legend, in a saga that charts the ascent of one of history’s greatest nations. Kings will rise. One will rule.
—Narrator, Steam Page

Thrones of Britannia: A Total War Saga is a standalone game in the Total War series that serves as a sort of indirect sequel to both the classic Medieval: Total War Expansion Pack Viking Invasion and Total War: Attila Expansion Pack Age of Charlemagne, taking place in the early Middle Ages in the isles of Britannia. As the petty kingdoms of the Anglo-Saxons, Gaels, Welsh, and now-settled Norse continue to squabble, kings famed in story and song begin to rise and build legacies that will outlast their line; there can only be one ruler of Britannia, and each intends his children to hold that throne. However, further raids from the mainland arrive all the while, and there's no guarantee that another power might not look upon the fractured isles with the intent to conquer...

The player is able to play as one of ten separate factions at launch, drawn from five different cultures:

Each faction will sport often similar baseline troops, but wildly different rosters as the campaign proceeds - an emphasis on variety of gameplay both on the campaign map and the battle map, despite the more constrained geographical location. The game completely overhauls how the classic Total War campaign works, adding mechanics such as branching storylines for each faction, overhauled technology trees that expand based on player action rather than simply being linear progressions, and a recruitment system aimed at making the decision to raise a new army more of a strategic one rather than a spur-of-the-moment choice.

Thrones of Britannia: A Total War Saga was released on May 3, 2018.