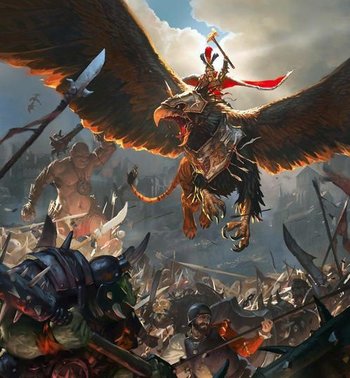 "Our rules have changed; the only constant… is war."
"Almighty Sigmar, saviour of the Empire, give me strength… For though I dedicated my life to eradicating it, it feeds, it grows: devouring all… There must be a final answer, to halt its advance... But the tide of War seems endless - The brutal, unthinking bloodlust of the Greenskins, the twisted ambitions of the undead. And though the brave Dwarfen Kingdoms stand with us, truly, what hope is there? Against countless horrors that cannot be named, let alone fought by mortal means? And yet all this is nothing before what is to come… It whispers and roars, in the dark it is, against us, it is ... it is unstoppable (Demonic Possession)... I am unstoppable, I see it now... the beast that will devour the world..."
— Narrator, Announcement Trailer
Advertisement:

Total War: Warhammer is a Real-Time Strategy game developed by Creative Assembly and published by Sega. The game features the gameplay of Total War with the factions of Games Workshop's Warhammer. Released on May 24, 2016, it is the ninth title in the Total War series and the first title in a planned trilogy.

The drums of war echo across the land, as the factions of the Old World prepare for ceaseless war. The Empire, formerly torn apart by the greedy and the selfish, are now united under their Emperor, Karl Franz, Elector Count of Reikland and Prince of Altdorf, the wielder of Ghal Maraz, the great warhammer of Sigmar Heldenhammer!

In the dark forests of Sylvania, thousands of undead warriors gather, commanded by their dark overlords, the mighty Vampire Counts led by the scheming and ambitious Count Mannfred von Carstein, self proclaimed Elector Count of Stirland and true Emperor of Man, hellbent on forever enshrining the terrible midnight aristocracy, and bring about eternal night!

No longer hiding in their mountain holds, the brave Dwarfen Kingdoms are under a resurgence underneath their mighty and noble High King, Thorgrim Grudgebearer, who intends to cross out every grudge in the Dammaz Kron, and restore the ancient Dwarf Empire to its once glorious self, no matter what it takes.

In the badlands, a particularly brutal Orc Warboss, Grimgor Ironhide, seeks to unite the squabbling Greenskin tribes, whether they be Goblins or Orcs, and form the biggest Waaaaagghhhhh!!! in known history, to crush any and all who oppose him, until only the strongest are left to fight on endlessly.

Stalking the black undergrowth of the Drakwald Forest, horrible tribes of mutated humans, known as collectively as the Beastmen, raid and pillage across the Empire solely motivated by their pure hatred of the notion of civilization, striking at the most vulnerable, and disappearing back into the dark depths of the trees, led by the Beastmen Warlord, Khazrak the One-Eyed, who seeks vengeance against his most hated foe, the Elector Count of Middenland, Boris Todbringer.

In the dreary glades of the ancient Elven kingdom of Athel Loren, the mystic Wood Elves, and ancient forest spirits awaken from their centuries of slumber to guard their forests from the invading mortal races, and Beastmen raiding parties that dare trespass on their sacred groves. Their leader, the demigod Orion, King of the Forest, blows his horn, and signals the start of The Wild Hunt!

In the chivalrous nation of Bretonnia, brave knights, and hordes of men at arms prepare for the ultimate crusade, an Errantry War of untold proportions, to finally end the enemies of the Lady once and for all, led by brave King Louen Leoncoeur, Duke of Couronne, and Grail Knight of the Lady.

In the cold and cruel tundras of the far north, The Norscan Tribes have been starving for challenges and riches for too long and thus decides to venture south in their desire to please their gods, with Wulfrik The Wanderer taking the charge of this main assault against the civilized world.

In the far twisted Chaos Wastes, dark creatures, and savage warriors marshal, mortal servants of the Chaos Gods, the Warriors of Chaos, in insurmountable numbers, who intend to blot out the light of civilization, and finally bring about the apocalypse in the name of their dark gods, headed by the powerful and enigmatic, Archaon, the Everchosen of Chaos, and bringer of the End Times!

It is a dark and bloody age. An age of mythical monsters, an age of magic, an age of heroism, savagery, and endless war...

The gameplay differs considerably from previous games in the series in a number of ways, largely to be more in keeping with the Warhammer universe. Primarily, each faction plays notably differently from the others, with entirely unique unit rosters and a number of faction-specific strengths and restrictions that go far beyond those in historical Total War. Legendary Lords are major characters from the Warhammer lore that serve as your faction leaders and primary generals. They are functionally immortal (merely being wounded for several turns instead of killed) and thus lead your forces through the entirety of the campaign. Randomly generated, killable Lords much like earlier games' generals can be recruited as well. Agents have been replaced by Heroes, who perform similar functions but can also serve as powerful combat units on the battlefield. This is also the first Total War game to feature flying units, such as dragons and gyrocopters, and especially large, powerful units like Giants and the enormous Arachnarok Spiders. Other features, such as city-building, diplomacy and unit-building remain largely unchanged.

The first of the trilogy is set in the Old World and focuses on the factions of the setting warring against each other for control over the titular landmass, before Chaos decides to kick start the End Times, and destroy everything. Playable Factions include the Empire of Man, the Dwarfen Kingdoms, the Vampire Counts, and the Greenskins. Four paid expansions, and one free expansion, added The Beastmen, The Warriors of Chaos, The Wood Elves, the Norscan Tribes, and the Kingdom of Bretonnia to the setting.

Many tropes that apply here also apply to Warhammer, and vice versa.

On September 28, 2017, a sequel titled Total War: Warhammer II was released, which also features the High Elves, the Dark Elves, the Lizardmen, the Skaven, the Tomb Kings, and the Vampire Coast.

On February 3, 2021, another sequel titled Total War: Warhammer III was announced, set to add the Tzardom of Kislev, the Empire of Grand Cathay, the Daemons of Chaos (split among Khorne, Tzeentch, Nurgle, Slaanesh, and Chaos Undivided), and the Ogre Kingdoms.

open/close all folders
A-C
D-I
J-P
Q-Z
"War is upon us. It is unending."
Feedback