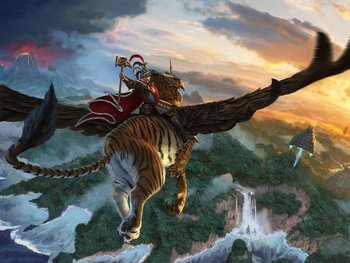 "The World that Was..."
Main characters index | The Empire | The Kingdom of Bretonnia | The Dwarfen Kingdoms | The High Elves | The Dark Elves | The Wood Elves | The Lizardmen | The Vampire Counts | The Tomb Kings | The Vampire Coast | The Warriors of Chaos | The Beastmen | The Norscan Tribes | The Skaven | The Greenskins

Unlike the average Total War game, which features conventional, distinctive-but-similar human armies, the playable armies of the Total War: Warhammer trilogy are vastly different from each-other in appearance, mechanics and even species, necessitating individual pages to describe each of them in detail.

Humans are a relatively young race in the Warhammer world. They do not remember the departure of the Old Ones or the first coming of Chaos, nor do they have the depth of knowledge and wisdom of the Elder Races. However, they have grown to be a dominant species in the world, dwarfing the Elder Races by their numbers if not their sophistication. Unlike other races, Humans are a diverse species, having as many corrupted and cowardly individuals as they have brave and wise heroes. For better or worse, they have taken a central role in balancing the fate of the world.

Old, declining, yet proud beyond measure, the Elder Races were present in the Dawn Times, when the first of their kind were sculpted by the hand of the Old Ones themselves. Thus, they tend to be far more resistant to Chaos than humans. In times past all of them built magnificent civilizations, grander than anything Man has achieved so far. However, millenia of strife and tragedy have inevitably led to their decline, and they are now a shadow of their former selves. Despite all this, they still represent some of the most formidable forces of the world.

Beyond the veil of reality lies the Realm of Chaos, home to four gods so powerful one of them alone could snuff out the world and its gods along with it, and would do so gladly. Having first invaded the world millenia ago only to be barely repelled by the combined might of the Elder Races, the Chaos Gods and their Daemon armies cannot easily walk through the world and are barely contained to the poles. Now the Forces of Chaos, mortal minions of the four gods corrupted by their influence or lured to their side by promises of power, lie in wait for the right time to destroy the world and watch it burn. And that time is approaching...

The Greenskins are considered by many to be the scourge of all civilization. Big and mean or small and mean, these green-skinned monstrosities can be broadly categorized into two species: The large and brutish Orcs and the small and cunning Goblins. Supremely violent, they exist in a permanent state of war against anything and anyone they can see. Time and again, Greenskin hordes arise without warning and lay a great swath of destruction that has no direction or purpose other than simple violence, an ever-increasing mass of warfare that has the potential to dominate and cover the entire world in a seething green tide.

The Wind of Death blows strong in the Warhammer World, and the dead have long and bitter memories. The Undead are the logical result of the short-lived humans' efforts to achieve immortality, no matter the cost. Nagash, first of the Necromancers, was responsible for developing the malign art of raising the dead to serve a master, which indirectly contributed to the rise of the Vampires and their diverse bloodlines, who control armies of cadavers of all sorts and are megalomaniacal in their pursuit of eternal un-life.

A malevolent and diabolical race of ratmen whose warrens span a global inter-continental underground empire known in their tongue as the Under-Empire. The Skaven are a cruel and vicious species whose military power and incomprehensible numbers have the potential to smother all the kingdoms of the Old World, a destiny the ratmen believe is inevitable. Scheming and treacherous, the Skaven consider themselves the supreme master race, undeniably superior to all other civilizations in the Warhammer World. They are constant enemies of the Dwarfs, the Night Goblins, and all non-Skaven races. And of each other, if we're honest. 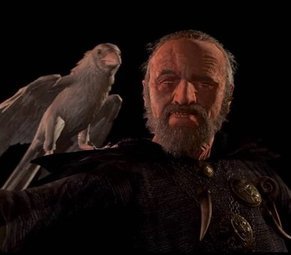 "As gods battle for the world's fate, I make my own humble contribution."
Voiced by:

An elderly human who serves as an advisor to the player's selected faction. Is the narrator of all faction intros and certain trailers. 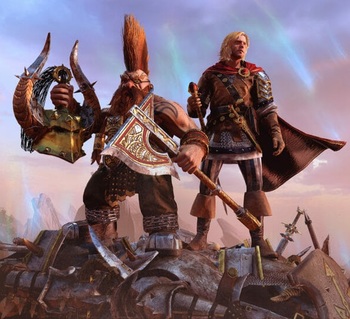 Gotrek Gurnisson, a Dwarf Slayer, and Felix Jaeger, his Human chronicler, are a duo of warriors travelling throughout the length and breath of the Old World, battling Dark Forces and stopping plots in Gotrek's quest for a heroic death against a terrible foe. The adventures of these warriors have been written down in the series of books: "My Travels with Gotrek" by Master Felix Jaeger, which outlines Felix's many adventures with his maniacal comrade throughout many of their endeavours, recording everything till the day Gotrek has finally met his doom, and will finally be allowed to enter the halls of his ancestors.

The skills of these two heroes is near unequal in the known world, their deeds becoming near legendary in the eyes of many of their own people. Their exploits have led these two warriors to places only heard of in whispers and legend. Such extraordinary lands includes them taking an expedition to the far north, towards the ancient Lost Hold of Karag Dum, being teleported to the mysterious foggy swamp-lands of Albion, travelling to the scorching sand-encrusted palaces of Araby, and even going as far east as the great cities and spires of legendary Cathay itself. In these distant lands, Gotrek has cleaved a mighty toll of beast, monsters, and warriors alike, as he tries his greatest to find the glorious deaths that seems to elude him on every battlefield. Alongside this fearsome warrior travels a young poet and swordsmen by the name of Felix Jaeger. A black sheep of a rich mercantile family, this poet and writer had been with Gotrek for nearly 20 years, fighting alongside his maniacal companion as he writes down all of his mighty deeds within one of his many published and popular books.

Though sometimes considered vigilantes of the law, and sometimes having themselves locked up by the very people they tried to protect, such is the deeds these two have achieved in their twenty long years of battles after battle that the Old World gives them a silent prayer of deliverance and thanks, for these two have done things no mortal has ever been able to accomplish in many generations, having defended many mighty cities like Nuln and Praag from utter destruction, saved entire Kingdoms from the claws of ruination, and felling mighty warlords of the northern wastes, who seek to bring the end of the world as we know it. The forces of evil they encounter during their journeys will always be stopped, for these two are almost unrivalled in combat, and are considered among the world's most powerful heroes of this age, and many ages since.

The duo are the main characters of the long running series Gotrek & Felix.

Gotrek & Felix appear in the second game as a Legendary Lord and Hero (both Heroes in multiplayer) respectively, recruitable only to Empire, Bretonnian and Dwarf factions. Rather than being recruited conventionally, they can be hired for 30 turns before they depart to parts unknown once again, though they may always return later. Both the player and the AI can gain control of them.

They are available to download as of October 17th 2019 as FLC characters (For the Mortal Empires Campaign and Custom/Multiplayer Battles), but they could be received early to those who purchased the White Dwarf issue of September 2019.

A new type of faction introduced in the second game, Rogue Armies are independent horde forces that plague the New World, consisting of mercenaries from different races underneath one banner and unified by a similar theme and flavor — as such, their armies can consist of units from different races' rosters. They primarily loot temples and wander the campaign map sacking and pillaging cities, but if they become strong enough they can settle down and become full-on factions in their own right. They can be either powerful enemies or strong allies depending on how the player interacts with them.

N'Kari is an infamous Keeper of Secrets, a powerful Greater Daemon of Slaanesh, that can trace her origins to the Great Chaos Incursion that occurred during the time of the Old Ones long ago. During that great struggle, the first Phoenix King Aenarion destroyed N’kari’s mortal form, banishing her back to the Realm of Chaos. However, she has continuously reappeared throughout the millenniums, wreaking havoc in the name of the Prince of Pleasure wherever she goes.

While she has not made a physical appearance in the trilogy (yet), according to the second game she has played a heavy role behind the scenes...