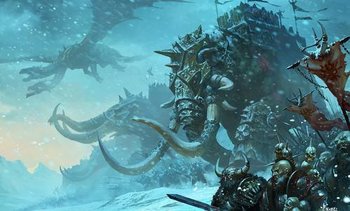 "We fought monsters... and we became them..."
"Khorne!" they roared, invoking the sacred battle-name of Kharnath the Blood God, Lord of Battles. "Khorne!" they howled until it seemed the walls must fall from the violence of their voices alone. "Khorne!" they shrieked as they gnashed their teeth and bit their shields."
— Norse Berserkers at the Siege of Wisborg

The harsh and brutal nature of the far north is reflected in the grim character of its peoples. Yet even more than the privations of their cold and barren lands, their proximity to the Realm of Chaos shapes the Norsca and other northern tribes. Rather than fight the darkness, they embrace it, worshipping the forces of Chaos as Gods, providing a willing army for the Ruinous Powers' never-ending war against order and reason.

Though physically tougher and more powerful than those living an easier life in the south, the Northmen are still Men — although many of them will have their humanity warped by mutations, and their savagery and barbarism are legendary. War is their natural state, and whether raiding across the Sea of Claws in their longships or feuding with neighbouring tribes, their blades never go long without blood. They follow the Ruinous Powers with unquestioning fervour, personifying them as the Hound, the Crow, the Serpent and the Eagle. They need no priests to intercede with their Gods, believing the slaughter and terror they bring is an act of worship in itself, though they are also highly superstitious and often raise twisted shrines and make blood offerings to honour whichever deity they hope to win favour with. The shared ambition of every northern warrior is to cause the greatest possible bloodshed and mayhem in order to appease and please their Gods; in seeking this goal most die violent deaths, or fall into warped insanity, but a few become favoured as Champions of the Gods, often "blessed" with mutations such as a melding of flesh and armour, or weapons fused with the hands that wield them.

No single Lord holds sway over the nomadic northern tribes, although men and monster alike are increasingly drawn to fight for King Throgg, a Troll of surprising intellect, or to follow Wulfrik the Wanderer, a Norscan warrior cursed by the Gods to forever seek out and fight the mightiest opponents. And whenever the Ruinous Powers prepare for a new assault on the south the Northmen put aside their petty disputes and rivalries and unite behind their Champions, ready to fight and die in the name of their Gods. At times like this, the Realm of Chaos itself swells and expands, bleeding over into mortal lands. One day, the Norsca believe, their advance will not be checked, and Chaos will swallow the world. 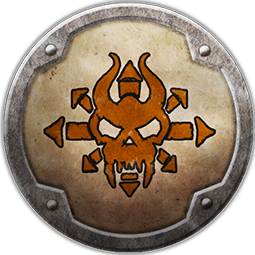 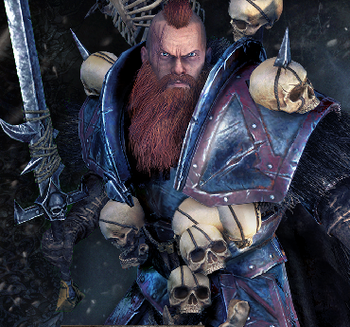 "A challenge? Undeniable!"
"Dogs of Norsca, the bones of your brothers lie buried in the snow, far from the halls of their ancestors! The beasts who visited such craven death upon your comrades come now to feast upon their still-warm flesh! You run when I tell you to run, now fight when I tell you to fight!"
Voiced by: Edward Dogliani

Wulfrik the Wanderer, known also as the Eternal Challenger, the Inescapable One and the World Walker, is the ultimate sea-faring warrior. A mighty giant of a man, clad in hulking plate and bedecked in the trophies of his many kills, Wulfrik travels the four corners of the world, seeking the greatest and most deadly warriors and beasts to bring them to battle and slaughter them as demanded by the Gods.

One of the most devoted followers of Chaos to walk the earth, Wulfrik has made offerings of lords, kings, sea-serpents and dragons to his masters. To Khorne he offers up their skulls, to Nurgle the contents of their slit bellies, to Slaanesh their still-beating hearts, and to Tzeentch their dying breath.

Wulfrik leads what was initially known as the main Norsca faction, simply named Norsca, but was renamed World Walkers as of The Potion of Speed update. 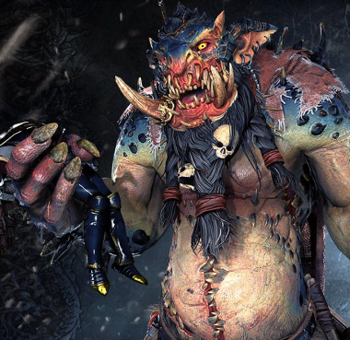 "You want to die now, or when my ice age comes!?"
"What the gods gifted to me can be gifted to another. I will not be the one mind in a race of blunt, witless animals."

Throgg, King of the Trolls, is among the most unnaturally intelligent of his vile kind, intent on bringing the world under the rule of a new ice age with himself at its head. Even the most lackwit child knows that Trolls are grossly stupid beasts. Nonetheless, around the campfires of the north, there persist rumours that in the depths of Troll Country there is an elder beast whose mutations were not just of the body but also the mind — a Troll King possessed of a grim and malevolent cunning who seeks to grind the realms of Man under his monstrous rule.

At the heart of an icy labyrinth strewn with the gnawed corpses of once-mighty heroes, the Troll King, Throgg, sits brooding upon his rocky throne. No fanfare announces his arrival, no vassals pay him tithe, and no courtiers vie for his favour. His subjects are drooling, stinking monsters and his domain is a desolate and wind-whipped wasteland. A filth-encrusted crown rings one of the Troll King’s tusks, a once priceless heirloom taken from a great warrior whose quest led him only into Throgg’s gullet.

Azrik is a powerful Lord of Change, an avian Greater Daemon of the Chaos God Tzeentch. A strong sorcerer, Azrik is available to lead your armies if a Norscan Chieftain pledges themselves to the Eagle in the Grand Campaign.

Kihar the Tormentor, Champion of Slaanesh

Kihar the Tormentor is one of Slaanesh's many champions, though few match his cruelty and depravity. Mounted on a Chaos Dragon, Kihar is a potent wizard, and can aid any army as a hero unit, although his services require pledging oneself to the Snake in the Grand Campaign. 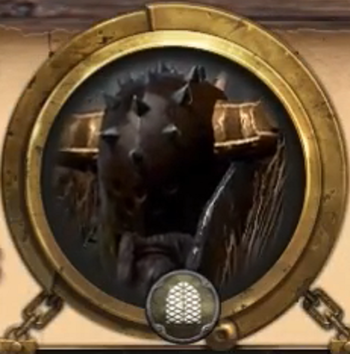 The ruler of the Varg Tribe (changed to the Saerl when Norsca became playable), Surtha Ek is a Norscan chieftain known for his mastery of chariot warfare.