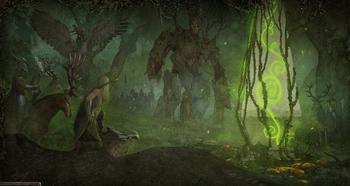 "Protectors of Athel Loren!"'
"Athel Loren shall not suffer the presence of Men, nor Orcs, nor Dwarfs, nor Beastmen. If a foe takes a single step upon such sacred soil, they shall not take another."

To outsiders, the forest realm of Athel Loren is a brooding and malicious place. The creak and groan of living wood echoes from its dim interior, the canopy seems to absorb all light, and half-seen spirits dart between the twilit bowers. To enter is to place your fate in their hands.

Within dwell the Asrai, the Wood Elves. Though they hail originally from Ulthuan to the west as all Elves do, they spurn the sanctimonious arrogance of the Asur, the High Elves, and the murderous decadence of the Druchii or Dark Elves. The Asrai consider themselves to be the only true Elves left in the world, as they embrace all aspects of their nature – both light and dark – and for thousands of years, they have lived in harmony with the sentient forest.

Tall, slender humanoids who live within the ancient forest of Athel Loren, the Wood Elves are a mysterious race who rarely emerge unless coming to its defence. Although sometimes appearing cruel, in reality they are a neutral power who act only to maintain the balance of their environment. Elves are not just long-limbed, they also live for thousands of years, which naturally makes other races seem trivial and irrelevant; only the preservation of their forest home matters, everything else – the affairs of mere ’mayflies’ – is of little importance or consequence to them

Although incursions are driven back, there are constant threats to the Wood Elves’ forest home and way of life. In order to combat Athel Loren’s many foes, they have developed elite warriors and can call on the forest itself in its defence. In addition to this martial strength, beneath the forest floor lie the Worldroots, enabling subterranean travel;

The Asrai share the wilds of Athel Loren with its spirits and protectors: the Dryads, the Branchwraiths and the ancient guardian Treemen. They adopt its steeds, hawks and Great Eagles for their warhosts, and even rare Forest Dragons may deign to join them when the need is dire. Peerless archers and riders, the Wood Elves pay fealty to the demigod Orion, who dies in flame each midwinter, only to be reborn into thunderous life in spring beneath the Oak of Ages.

Wild, lithe, and utterly ruthless in defence of their land, only a fool would goad the Wood Elves and their spirit allies to conflict. For those who witness the awesome spectacle of an Asrai host marching out of the woodlands on a Wild Hunt, it is likely the last thing they will ever see.

The Wood Elves are playable in both custom games, the Grand Campaign, and Mortal Empires (with the Realm of the Wood Elves DLC installed). 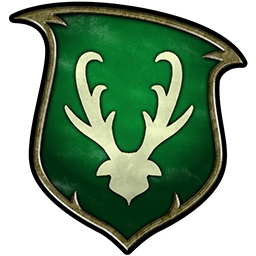 Orion, the King in the Woods 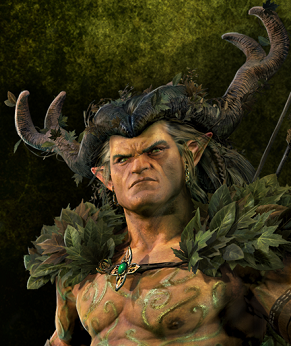 "The Wild Hunt begins!"
"My king, you have performed deeds others could not achieve in a thousand lifetimes. You have held a mirror up to your subjects and shown them the truth of what they are: proud, noble, but most of all wild. Do you understand? You are more than you were – more than just flesh and bone; you are everything that defines us. "
Voiced by: George Watkins

Orion, known by many titles such as the King in the Woods or the Master of the Wild Hunt, is the everlasting Lord of Athel Loren and co-ruler of the Wood Elven race. He is immortal, but his existence is irrevocably tied to the seasons. Thus does he pass willingly into his own funeral pyre each midwinter, only to be reborn into thunderous life on the first day of spring. Each year, on the eve of the vernal equinox, the Wild Riders selects a young prince who will bear the mantle of Orion for the coming year. This chosen one is led to the Oak of Ages and given over to Ariel’s keeping.

There, she works the miracle of rebirth, sculpting her lost husband anew from the chosen one’s flesh and Kurnous’ spirit. On the following morning, the chosen one emerges from the Oak’s embrace, a mortal Elf no longer, but reborn as Orion, god-king of Athel Loren. When his realm is threatened, Orion is the first to fight in its defence. Taking up his mighty weapons of war, he winds his great horn and calls Athel Loren to the Wild Hunt. Every Elf feels the lure of their king’s wild summons, and many are overcome by this most primal of urges. Drawn to their king’s side, they gladly abandon their civilized concerns for the thrill of the hunt and the heady tang of blood upon the wind.

Orion leads what was initially known as the main Wood Elves faction, simply named Wood Elves, but was renamed Talsyn as of The Potion of Speed update.

Durthu Oakheart, the Eldest of Ancients 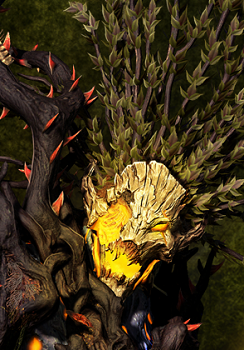 "I am ancient. Eternal. Vengeful. I am Durthu!"

Durthu, or Oakheart, is an Elder of Athel Loren, a Treeman so ancient that even Ariel’s millennia-long existence pales in comparison. It was he who first forged a union between Elves and forest, and he also who argued with his fellow Elders that the binding be made permanent. In those days, he was ever a friend to the children of Isha, always willing to help them broaden their understanding of the forest and of the Weave.

Alas, those days are long gone. Centuries of destruction and carnage have taken their toll on Durthu’s valiant spirit. He has borne witness to the rapacity of blooded life, and of the wanton destruction it has heaped upon his homeland. He has seen untold acres of trees felled for kindling or from simple spite. He has watched, time and again, as the Elves have invited calamity on the forest through an inability to sever their connection to the outside world. Worst of all, he has seen his fellow Elders fall, one by one; some slain by their own foes but most destroyed by the enemies of the Elves.

Durthu leads a subfaction centered in the region of Argwylon, where he can recruit forest spirits but will need to pay in amber for Wood Elf units.

Ariel, the Queen in the Woods

Immortal mage queen of Athel Loren and the avatar of Isha just as Orion is the avatar of Kurnous, Ariel is co-ruler of the Wood Elves alongside Orion. Unlike Orion, Ariel's form is constant and there has only ever been one.

Ariel is not present in the campaign directly but is heavily referenced by Orion in both his diplomacy messages and the background of his magical item.