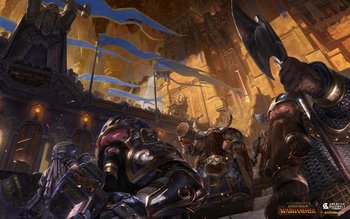 "Pay back every grudge!"
"We sons of Grungni may have drunk deep from the bitter waters of misfortune, but we yet survive. Whilst a single Dwarf draws breath, we will fight the evils that assail us, and we will never, ever give up."

The Dwarfs are an ancient race, once masters of a mighty empire, vast swathes of which are now lost to them. Yet they are driven by the need for vengeance, and remain defiant and unbowed. Dwarfs are shorter and stouter than Men, and are known for their broad shoulders, magnificent beards and dauntless hardiness. The most defining characteristic of Dwarfs, however, is a gruff and stubborn nature. Their innate obstinacy is the stuff of legends and countless tales speak of both the great fortunes and the tragedies of this immovable resolve. This tenacity is reflected in the makeup and strength of their armies, which are expert proponents of the defensive style of fighting, with heavily-armoured and unshakeable infantry sheltering deadly ranged units and a fearsome array of finely-engineered artillery. They do however lack any cavalry and so, with one or two exceptions, are resolutely slow-moving.

Dwarfs do not forget grudges, indeed they harbour them, and there is no word for forgiveness in their language. Once someone has made an enemy of a Dwarf, they have made a foe that will last their lifetime and the lives of their descendants as well. Dwarfs record any slight or transgression against them and each stronghold has its own Book of Grudges. Positive accounts of the Dwarfs tenacity speak of perseverance against all odds, a refusal to ever willingly accept defeat. Other sagas tell of dogged loyalty — of Dwarfs holding true to their word, honouring oaths despite vast dangers or the passage of centuries.

Rising high above the world in an endless series of jagged peaks stand the World's Edge Mountains. Beneath these snow-covered pinnacles, the Dwarfs have dug into the bedrock of the world, carving out mines and halls into a kingdom which they call the Karaz Ankor, meaning ‘the Everlasting Realm’. Although many of the Dwarfen strongholds now lie in ruin and have become the lairs of evil creatures, the glories of their past are not forgotten by the Dwarf race. Within the stony heart of every Dwarf there resides a deep-set and burning desire to avenge the grudges of old and reclaim what was once their own.

The Dwarfs have access to an expensive but elite force of heavy infantry and overwhelming firepower, favouring static gunlines, attrition warfare and steady advances over deft flanking and manoeuvring. This comes with strong trade and technology options, access to the Underway for easy transport of armies through otherwise impassable territory, and units possessing excellent morale and magic resistance. However, this must also be weighed against small unit sizes, a complete lack of both cavalry and magic, and a general lack of mobility across the board. Planned flanking and baiting can see individual Dwarf units being isolated, overwhelmed and destroyed.

Introduced in Total War: Warhammer, the Dwarfen Kingdom is playable in custom games, the Grand Campaign, and Mortal Empires.

NOTE ON SPELLING: In Warhammer, it's spelt Dwarfs and Dwarfen, not Dwarves and Dwarven 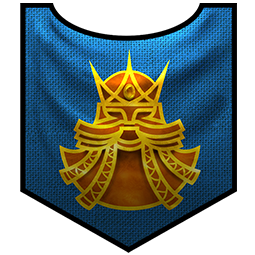 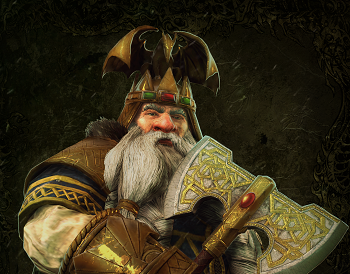 "Let us not dawdle, for there are grudges to settle, and new entries in the Dammaz Kron to write!"
"That which is wrong with the world that we cannot fix with the blades of our axes, we shall surely avenge!"
Voiced by: Richard Ridings

Thorgrim Grudgebearer is the current High King of the Dwarfs. He is a throwback to the High Kings of old—eager for new conquests, mighty in battle, and a merciless enemy. Yet upon his worn brow, there also sits a great wisdom, and he is able to uphold the ancient traditions as well as to accept (if not embrace) needed changes, such as alliances and new technology.

Thorgrim is forever brooding upon how to return his people to their former glory. As the ultimate ruler of the Dwarfs, the Great Book of Grudges is entrusted into his keeping. It is Thorgrim's avowed wish to avenge every single entry contained in that voluminous tome — an impossible task if he should live a thousand lifetimes. Yet such is his resolve that he has already helped to rejuvenate the whole of the Karaz Ankor. Tales of his deeds, and the long list of grudges already struck out, fill his grim warriors with a feeling that the Dwarfs have long done without: hope. Borne upon the Throne of Power and brandishing the Axe of Grimnir, Thorgrim is at the forefront of what the Dwarfs hope will be a great conquering — a new age of retribution has begun.

Thorgrim leads what was initially known as the main Dwarfs faction, simply named Dwarfs, but was renamed Karaz-a-Karak as of The Potion of Speed update. 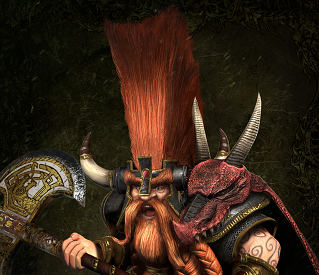 "Bring me victory! Bring me death!"
"I fear there is no foe worthy of my death!"
Voiced by: Alastair Parker

There are few kinds of monsters that walk the world that Ungrim Ironfist has not slain in battle. Armed with the enormous Axe of Dargo, Ungrim deals death – carving a path of red ruin before him while singing songs of old in a booming voice. Atop his head is a bright orange crest that rises above a sturdy horned helmet set with a golden crown. For Ungrim is both a Slayer and a King, more than likely the last of the line of Slayer Kings of Karak Kadrin.

The tale of Ungrim’s family, the Drakebeard Clan, is full of woe, as those in the clan of royal blood bear a history of calamities. Many years ago King Baragor, Ungrim’s five times great grandsire, suffered a terrible loss which drove him to take the oath of the Slayers. What caused such a drastic decision was not recorded. It is commonly assumed that the cause was the death of his daughter at the claws of the Dragon Skaladrak while on her way to marry the son of the High King of Karaz-a-Karak. In any case, Baragor became the first Slayer of Karak Kadrin. He was torn between conflicting vows: the Slayer oath to seek out death and the oath of a king to protect his people. In the end, good Dwarf sense prevailed, and he found a way to honour all commitments. He founded the famed Slayer shrine of Karak Kadrin, the largest shrine to Grimnir. Thus, he established a haven for Slayers that continues to this day. His son inherited his vows and continued the line of the Slayer Kings, of which Ungrim Ironfist is but the latest.

Although Ungrim cannot seek his death in Slayer fashion, he grows ever more restless, leading the throng of Karak Kadrin into countless battles. Inspired by his High King and seeking to avenge his lone son who was slain, Ungrim will march to war with the least provocation. It was Ungrim who slew the Dragon of Black Peak and who broke Queek Headtaker’s siege of King Belegar’s citadel in Karak Eight Peaks. The Slayer King has beaten the Ogre mercenary Golfgang Maneater and held off a Chaos army in the Battle of High Pass. Most Dwarfs are amazed Ungrim has lived so long, and none think that a mighty death in battle can be very far away.

Debuting as a Legendary Lord in the service of the main Dwarfs faction in Total War: Warhammer, the "Resurgent" update for Total War: Warhammer II moves Ungrim to the now-playable subfaction of Karak Kadrin in the Mortal Empires unified campaign map. 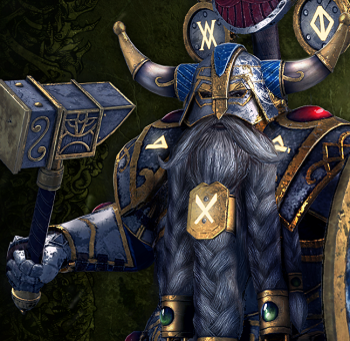 "Let them face our might; let them see what dawi of the Angrund Clan are made of!"
"I came here hoping to take it all back. I came hoping to look upon the far deeps, on the ancestor statues of the Abyss of Iron’s Dream. I dreamed of opening up the Ungdrin again, so that armies might freely march between my, Kazador’s and Thorgrim’s realms. I dreamed of reopening the mines, of filling the coffers of our clan with gold and jewels."
Voiced by: Nick Fletcher

Ancestral heir of Karak Eight Peaks, King Belegar has a terrible and glorious destiny to fulfill. He has sworn an oath to reclaim the fallen Dwarf Hold from the Greenskin usurpers, despite the mountainous odds he faces.

Karak Eight Peaks represents more than Belegar’s birthright, however. In terms of prestige and wealth it is second only to Karaz-a-Karak itself, and if Belegar can reclaim it in the name of Clan Angrund, he will gain access to the ancestral tombs and the rich trove of ancient and powerful rune-weapons which lies within...

Belegar Ironhammer is a Legendary Lord available to those who purchase the The King and the Warlord DLC. Belegar also leads his own unique, playable, sub-faction, Clan Angrund. 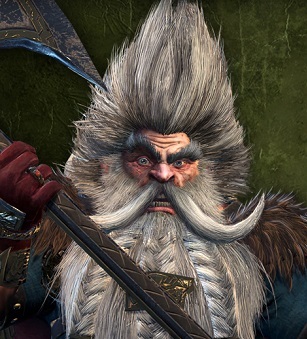 "I promised Grimnir there'd be a mighty tally, and I ain't one for breaking such an oath!"
"The last crimson rays of sunlight scattered on the battlefield at sunset after the carnage of that day. The last handful of dwarf warriors had resisted against the attack of the Goblins, but the arrival of night The Goblins would be strengthened and attacked again.This time they would not leave any survivors. And one by one, the weary Dwarves began to sing their funeral songs. And one by one they sang until a single figure wrapped in a cloak remained in silence, firm and challenging. "
Voiced by: John Rhys-Davies

Grombrindal, the White Dwarf himself, is a hero from the time of legends. Rumors abound as to his true identity. Some say he is the living incarnation of the ancient High King Snorri Whitebeard himself; others that he was betrothed to the goddess Valaya, protector and bestower of magical resistance. Either way, he is a powerful living symbol of hope and pride for the Dwarfs and, in times of dire need, he may appear in the flesh to help the Dawi through their tribulations.

Grombrindal is a free Legendary Lord who became available in January 19th 2017, but could be acquired early through the use of a Steam code provided by Games Workshop at their hobby stores and in the November 2016 issue of White Dwarf Magazine.