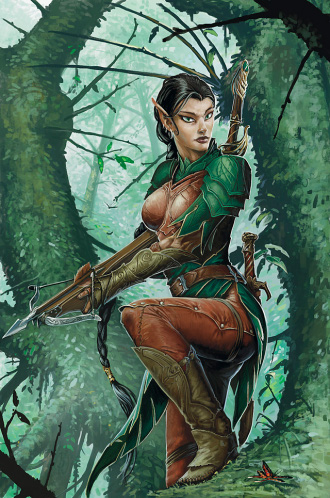 No fires or littering!... Seriously, this thing isn't for show.
Advertisement:

No, we aren't talking about the kind fellow at the national park who wears the snazzy uniform.

We are talking about the forest-dwelling recluse who serves as a self-appointed guardian for their ancient and enchanted home. They may wear green in an attempt to blend in to their forest surroundings. They guard their forest with their bow slung across their back, and would rather take your hat off with an arrow than post a polite notice to please put out your campfire before you leave. In a Standard Fantasy Setting, expect at least one elf to be this trope.

The Forest Ranger may also be a Nature Hero and have similar associating tropes, however, the Forest Ranger is not a hero and may be a member of a large group of forest dwellers, such as an elven city, or even be a guard to such a city.

Primarily meshes with Archer Archetype, but Rangers with An Axe to Grind or wielding a Blade on a Stick are also common. If they are more civilized, they might use Bow and Sword, in Accord. Lesser known fact - the word 'ranger' does not mean 'one who fights from range', but 'one who watches over a range.' Like modern-day Park Rangers. So they are not at all limited to Archer Archetype. Not to be confused with bushranger, a term for a 19th-century Australian outlaw.

Supernatural variants, be they The Fair Folk, tree-creatures or Nature Spirits, may also be a Genius Loci. Compare Nature Hero and Mountain Man. Contrast City Guards.