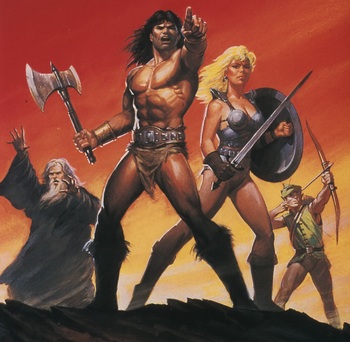 Introduced in 1985, Atari's Gauntlet was based on the earlier Dandy, written for the Atari 8-Bit Computers. Up to four heroes — a warrior, a valkyrie, a wizard, and an elf — went Dungeon Crawling, viewed from above in a scrolling window, collecting treasure and defeating monsters. Each player had a joystick and two buttons, labeled "Fire" and "Magic"; the latter button activated a potion which weakened or destroyed all enemies on the screen. Each hero had a specialty: Thor the Warrior excels in melee combat, Thyra the Valkyrie had the best armor, Merlin the Wizard can destroy all hostile targets with magic, and Questor the Elf trumped everyone in agility.

To keep you feeding coins, Atari invented the "Wizard Needs Food Badly" trope: While food provides healing, your character loses one Hit Point every second under any and all circumstances, basically guaranteeing a Game Over at some point. (For obvious reasons, this tends to be averted for the console releases.) Mook Makers are another signature trope of the series; they need to be destroyed if you don't want to be swamped. Interchangeable Antimatter Keys need to be collected to get where you're going. You can shoot food and magic potion pickups, which is rarely as beneficial as picking them up, so it pays to be careful with your attacks. It had voice-acting, in extremely limited quantities: in addition to damage grunts from the four characters, there was also a Narrator whose announcements were assembled dynamically from pre-existing snippets: "Wizard needs food, badly" was one, but was always prefaced by the color of the player controlling that character. Finally, it was one of the first games to support four players at once, and this emphasis on social multiplayer was probably the biggest part of its success.

Advertisement:
In terms of home versions, Gauntlet was first ported to the various home computer platforms available at the time by Mindscape and U.S. Gold in 1986, with versions available on the ZX Spectrum, the Atari 8-bit series, Amstrad CPC, Commodore 64, MS-DOS, Atari ST and Apple II. In 1987, an NES version was released by Atari Games' consumer division Tengen, being one of the few Tengen games on the NES that was initially released as a licensed game before their fallout with Nintendo. The NES version was a reworked port that featured an actual storyline and an actual end to the game. In 1991, U.S. Gold released a Sega Master System version exclusively in Europe. In later years, Gauntlet has been included in various retro game compilations, including a two-pack with Rampart for the Game Boy Advance.

There have been several more entries in the franchise over the years:

As to re-releases, Gauntlet I has appeared on several different Midway Arcade Classics compilations, and the NES version is possibly the best known of the bunch. After not being heard about and assumed cancelled for a few years, a mostly completed ROM was uploaded on the internet.

The quote at the top of the page (or appropriate variants) has become something of an Internet meme, and several characters in fantasy oriented webcomics have uttered it as a Shout-Out.

The book PATHS OF EVIL uses these tropes: