A series of Digital Pinball Tables for various home Video Game systems. Most of the games were originally developed by Compile for the Japanese publisher Naxat Soft, though Alien Crush and Devil's Crush were later reissued by Hudson Soft on the Play Station Network and the Nintendo Wii Virtual Console. All of the games feature a mix of standard pinball mechanisms combined with gameplay features that could not exist in the real world, wrapped in a Science Fiction or Fantasy theme. 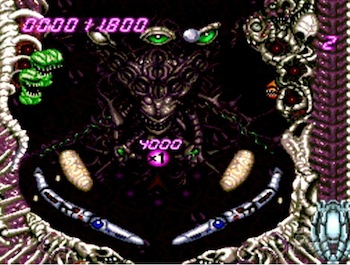 Absolutely not copying Alien at all, nosiree...

The first game in the series is Alien Crush, released in 1988 for the TurboGrafx-16. Set inside a Gigeresque environment, the player must defeat hostile alien creatures by hitting them with the pinball. The playfield consists of two main screens arranged vertically, with a pair of flippers at the bottom of each, and several bonus rooms can be accessed by accomplishing certain goals.

An enhanced remake/sequel, Alien Crush Returns, was developed by Tamsoft and released in 2008 by Hudson Soft on Nintendo's WiiWare service. It incorporated 3D polygonal graphics, "action balls" with enhanced abilities, and additional tables as downloadable content. 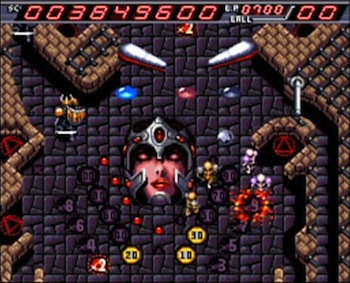 The pinball game every metalhead dreams of.

Devil's Crush (known as Devil Crash in Japan) was published in 1990 for the TurboGrafx-16, with an occult theme and lots of demons, skulls, and skeletons. The action takes place on a three-screen tall scrolling playfield, with a pair of flippers placed at the bottom of each "screen". Once again, several bonus rooms can be accessed by accomplishing certain goals.

The game was ported to the Sega Genesis by Technosoft and released in Japan as Devil Crash MD and in the US by Tengen as Dragon's Fury. Tengen developed and released a Genesis-only sequel, Dragon's Revenge, in 1993. 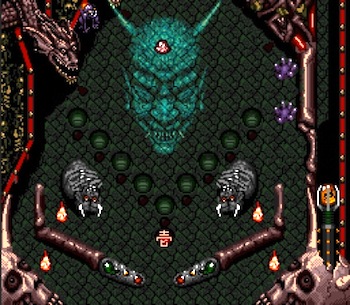 Naxat Super Pinball: Jaki Crush was released for the Super Famicom in 1992, and remains the only Crush game not to be released outside Japan. It continued the occult theme of Devil's Crush, but this time puts its focus on Japanese mythology (jaki is a Japanese word for a type of malicious energy, demon, or ogre), with a three-screen tall scrolling playfield and six hidden bonus rooms. It has alternating two-player play and two speed settings for the ball.