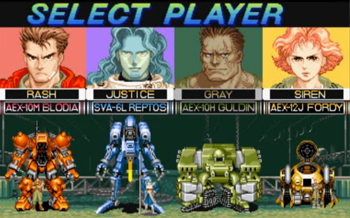 From the left: Jack-of-All-Stats, Fragile Speedster, Mighty Glacier and... er... whatever it is The Chick gets to drive.
Advertisement:

When there are four player characters available in a video game, often one of the choices (usually your first pick) is a balance of whatever stats the game plays with. The second choice is at one end of the stats scale; the third choice is at the other end, opposite of the second, and the fourth choice is somehow set apart from the three others by having a completely different gimmick, often one that doesn't directly tie into the stats scale.

The standard set up is a combination of Jack-of-All-Stats, Mighty Glacier, Fragile Speedster, and then something else for variety. But "Heavy and Powerful vs Light and Speedy" can be substituted by just about anything as is relevant to the game: magic vs. physical power, range vs. melee, jump height vs. run speed, offense vs. defense, or other things.

Related to Faction Calculus. Subtrope of Competitive Balance. The gimmick is often a Master of None, though it may prove Not Completely Useless in That One Level.