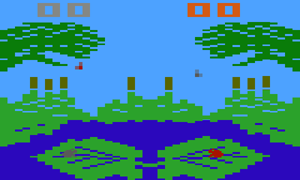 Frog Bog is a Competitive Multiplayer Platform Game by Mattel, an Intellivision game that was also released in 1982 for the Atari 2600 as Frogs And Flies, and later ported to the Commodore 64. Now available as Frog Bog on Xbox Live Arcade.

Each player controls a frog in a lily pond. Flies wander around overhead, and you jump up and try to eat them. Each fly is worth two points. Two lily pads are the platforms. If you land in the water, your frog will swim back to a pad. Each round lasts three minutes, and as the game goes on, day turns into night. Finally, both frogs jump offscreen, and a firefly drags a "The End" sign to the middle of the screen.

If you leave a frog alone for 15 seconds, the computer will control it. This leads to an Attract Mode, with the computer playing itself. No two games are identical; the frogs and flies are all controlled by some of the best AI ever seen on the 2600.