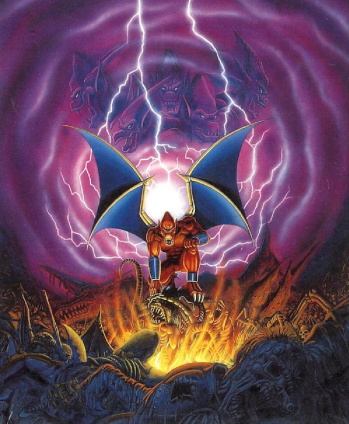 So Capcom put this lethal foe into the player's hands with a trio of spin-offs, released in 1990, 1992 and 1994. Naturally, he's not quite as deadly while being controlled, but he's still a force to be reckoned with.

Gargoyle's Quest and Gargoyle's Quest II star a Red Arremer (the eponymous gargoyle/demon) named Firebrand, a Proud Warrior Race Guy who wants to be the most powerful being in the Ghoul Realm. It just so happens that a prophecy has foretold that a "Red Blaze" will save the land from an unimaginable evil.

Demon's Crest picks up a while later. A mysterious sextet of magic stones has appeared in the Ghoul Realm, and the inhabitants fought over them, until Firebrand emerged victorious with five, and then defeated a large dragon to claim the sixth but was critically injured in the process. A rival demon, Phalanx, took the opportunity to attack Firebrand unhindered and claim the whole Crest for himself (except for a fragment still in Firebrand's possession), which he then spread out to his subordinates to assure their safety. Firebrand sets out to get them back.

Firebrand appears as a playable character in Ultimate Marvel vs. Capcom 3 and Marvel vs. Capcom: Infinite, as the developers wanted a flying character and thought Firebrand would be fun and interesting to play. He also appears as a boss character in Namco × Capcom, which makes him a Composite Character with the Red Arremer Joker from the Game Boy Advance port of Super Ghouls 'n Ghosts and refers to his appearance in Demon's Crest as pre-game backstory. The trilogy is also available on the Nintendo 3DS Virtual Console, though only the latter two games are available on the Wii U's. Demon's Crest became one of the first games available for the Nintendo Switch's Super NES Online service along with its cousin Super Ghouls 'n Ghosts.