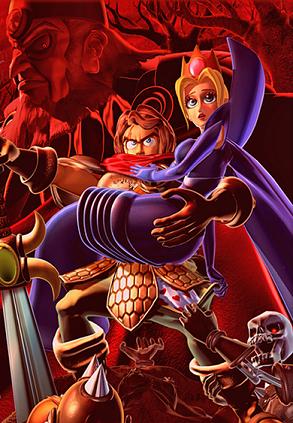 A Capcom Action-Adventure game with platforming and Hack and Slash elements, inspired by the infamous Ghosts 'n Goblins series.

The game begins with Maximo, a handsome and valiant knight returning home from war. He soon discovers that his beloved kingdom is in utter shambles, as his advisor, Achille, took over the kingdom while Maximo was away and forced Maximo's betrothed (Sophia) to marry him. Achille also got his hands on some very dangerous black magic and is now having a Giant Drill bore its way into the earth, causing some ill effects on the underworld—the souls of the dead are rising from the grave as either skeleton warriors or being absorbed by Collector Statues to be transferred to Achille.

Maximo, rightfully angry at Achille, tries to attack him, only to be killed by a devastating magical bolt, sending him falling through Limbo. However, the local Grim Reaper appears before him with a deal—Grim will not claim Maximo's soul if he agrees to go back to the living world and stop Achille's wicked goals. And so, with his trusty sword, armor and shield, Maximo will fight through a horde of undead to take back his kingdom...and Sophia.

The sequel, Maximo vs. Army of Zin, focuses on Maximo coming into conflict with a robot horde that were sealed away in the past.