Video Game / Marlow Briggs and the Mask of Death 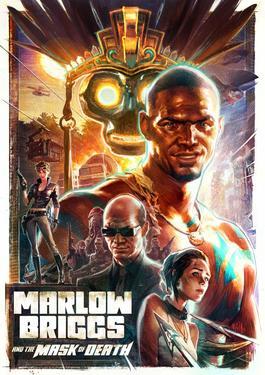 “This is a character action game where you play as a black dude who used to be a fireman and you get ancient fuckin' Mayan shit attached to you and you're fighting a Chinese guy in an industrial wasteland, and you get a scythe in South America. And your mask talks to you.”
— Matt McMuscles summarizing the game

Marlow Briggs and the Mask of Death is a Hack and Slash Action-Adventure game developed by ZootFly for the Xbox 360 and PC. It is a send-up of over-the-top Eighties action movies.

The eponymous Marlow Briggs, a smokejumper,

starts the game by getting killed. He is executed on orders of Heng Long (James Hong), a Corrupt Corporate Executive who needs the services of Marlow's archaeologist girlfriend Eva Torres to translate some Mayan codices. Long's Dragon, Ms. Carreras, uses a giant double-sided ceremonial scythe to make the kill... which comes back to haunt them all, as the scythe is ornamented by the titular Mask Of Death, home to the soul of King Tep. The Mask revives Briggs, and together They Fight Crime!, with the dual plans of: driving Long's out of King Tep's homeland; and: rescuing Eva.

Gameplay is basically God of War, right down to play control, but with a slightly less absurd primary weapon and set in a modern era. Enemies have rocket launchers... But with properly-timed use of the Block button, you can tennis the rockets right back at them. It's that kind of game.