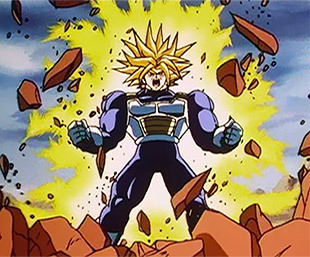 A character that has previously been shown to be able to swirl dust must now show off that they've gotten even stronger. How do they go about this? Frequently, by causing the very ground around them to break apart and start to float away. This debris might even orbit the character as if they were generating a magnetic/gravitational field.

Bonus points if the chunks are large enough and a character is badass enough to use them as stepping stones.

They may also cause a sudden shallow but pronounced indentation in the ground, as if they weighed several tons. This indentation will be much larger than their footprints (presumably the result of the force of their Battle Aura pushing against the ground, or possibly becoming a lesser form of a Sphere of Destruction). Has nothing to do with vomit or Ludicrous Gibs.