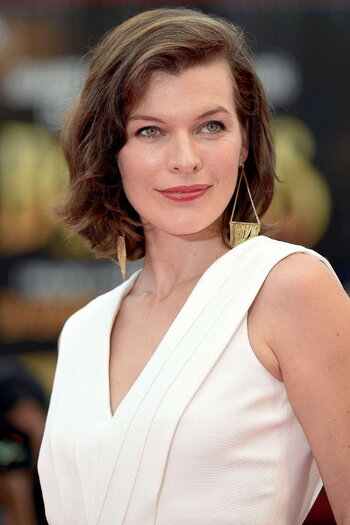 "I am a strong Ukrainian girl, that is why I work a lot."
Advertisement:

Milica Bogdanovna Jovovich (born December 17, 1975 in Kyiv, Ukraine) is an American actress and musician of Russian-Serbian-Ukrainian descent.note Born as Milica Jovović to a Serbian father and Russian mother. She's best known for her Action Girl roles.

In the midst of her modeling career, Milla Jovovich (pronounced mee-luh yo-vo-vitch) made waves in Hollywood with her roles as Michelle in Dazed and Confused and Leeloo in The Fifth Element. Today she is best known for playing Alice in the Resident Evil Film Series, to the extent that she's the most recognizable character from the franchise (despite not appearing in any of the games).

She tends to work a lot with her film director significant others, those being former husband Luc Besson and current husband Paul W.S. Anderson. She and Anderson have three daughters - Ever (who's a child/teen actress), Dashiel, and Osian.

She maintains her modeling and fashion designing career, and even had her own clothing line, Jovovich-Hawk, but it went under in 2008. She's also a singer, and although her last official album was released back in 1998, she continues to release demos, sing folk songs

, and contribute to movie soundtracks. However, an as-yet untitled EP is forthcoming.