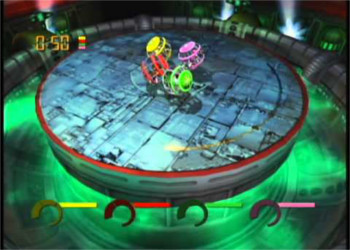 FUUUUUUUZIONNNNNNNNNNNNNN FRENNNNNNNNNNNNNNNZYYYYYYYYYYYY!
"In the near future, the city is a battleground where you compete against your friends for the glory of victory."
—Fuzion Frenzy, pre-main menu screen
Advertisement:

It's worth noting that unlike most traditional party games in its time, Fuzion Frenzy did not follow a linear game pattern. Each zone in tournament mode was randomly chosen and never overlapped with an already-selected zone, meaning that playthroughs were almost never identical.

A sequel titled Fuzion Frenzy 2 has been developed for the Xbox 360, which wasn't as well received as its predecessor.