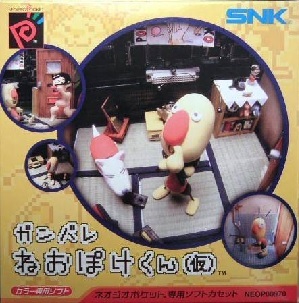 Ganbare Neo Poke-kun is an odd cross between a virtual pet and a minigame collection released in 2000 for the Neo Geo Pocket Color. As soon as you first run the game you meet the titular Neo Poke walking around in his little studio room. By pressing the A button a random character will come through the door and do something that often leaves Neo Poke confused.
Advertisement:

That would be basically all there is to this thing, but Neo Poke is a game developer and he'll program minigames from time to time if he's feeling well. This series of 30 minigames starts out as basic arcade challenges and gets (a bit) more complex as you go along. The more minigames are unlocked, the greater the amount of available skits and animations you can see.

Although SNK used Neo Poke as the Neo Geo Pocket's mascot, the game fell into obscurity and wasn't released outside of Japan. The character still got a few cameos in the company's later games.