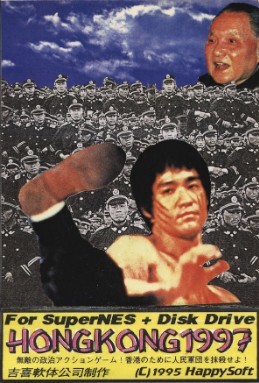 Sadly, you don't get to play as Bruce Lee in this game.
The year 1997 has arrived. A herd of fuckin' ugly reds. are rushing from the mainland.
Crime rate skyrockeded! Hongkong is ruined! Therefore, the Hongkong government called Bruce Lee's relative "Chin" for the massacre of the reds. Chin is a killer machine. Wipe out all 1.2 billion of the red communists!
However, in mainland China there was a secret project in progress! A project to transform the deceased Tong Shau Ping into an ultimate weapon!
— The game's opening narration
Advertisement:

(To better accentuate your experience, listen to this

Yes, you read that right.

Intended to be the biggest middle finger ever erected at the Japanese video game industry (with especially strong ire against Nintendo), this game served as the first of only two games (the other being The Story of Kamikuishiki Village

from two months later) released by HappySoft Ltd, released in 1995 as a Super Famicom exclusive, and the only game by Japanese businessman and essayist Yoshihisa "Kowloon" Kurosawa.

The fact that it even saw release is a mystery of itself, considering the small number of stores that were interested in stocking the game. There are also very few hard copies of the game out there, and the only way that most people play the game is through an emulated ROM. Rather than using conventional Super Famicom cartridges, the game was released on floppy disks that could work on an unofficial Disk Drive, much like the official Famicom Disk System. It's also worth noting that HappySoft is a game company that specialized in homebrews, and that fact alone should give you an idea of what Hong Kong '97 is like.

Hong Kong '97 is based around the 1997 transfer of Hong Kong's sovereignity from the United Kingdom to China, in which "a herd of fuckin' ugly reds" (Chinese mainlanders) immigrates to Hong Kong and causes the country to fall apart at the seams as the crime rate skyrockets. As a result, the Hong Kong government calls Bruce Lee's relative Chin (played by "Jackie Chan"), who is apparently a One-Man Army powerful enough to take on the assignment of executing the entire population of China (1.2 billion people!).

However, China has plans as well — more specifically, a project to transform "Tong Shau Ping" (an alternate spelling of Deng Xiaoping) into an ultimate weapon.note Deng was alive when the game was released, but actually died in 1997, making his role in the game's plot (or lack thereof) cohesive and reasonable.

The game is intentionally made to be as terrible and distasteful as possible, touching upon highly sensitive subject matter in seriously inappropriate ways. Among other things, the game is noteworthy for its sheer levels of Sinophobia, its flagrant and repeated instances of copyright and trademark infringement, and especially its use of photographs of real dead bodies, including victims of The Holocaust and the Bosnian genocide. Kurosawa intended Hong Kong '97 to be the most vulgar and disgusting video game ever put out on the market, and he was determined to see it through.

On a less overtly disgusting note, the game is also denoted by its purposely bad gameplay, being a barebones shoot-em-up that simply repeats one level and boss fight indefinitely; the fact that HappySoft's other game is a more fleshed-out city simulator (though not without its own focus on taboo subject matter, namely mocking the doomsday cult and terrorist organization Aum Shinrikyo) corroborates Kurosawa's claims that this title's poor gameplay was intentional. Either way, this game's content and quality were no accident whatsoever.

There was also a direct-to-videocassette film called Hong Kong 97 that starred Robert Patrick and Ming-Na Wen, but there are no ties to be made between the game and the film besides the name.

, while Joel from Vinesauce admitted he would never stream this bootleg due to its disturbing game over screen; he ultimately reneged on this once a censored version became available, allowing him to stream the game without worrying about its gorier content.

Kurosawa's involvement went unknown for years, in part due to it being a one-off project and also due to its huge shattering of social, political, and legal taboos. It wasn't until he participated in an interview

about the game in 2018 with the South China Morning Post that Kurosawa confirmed that he was indeed the director.

A herd of fuckin' ugly tropes. are rushing to the main page: