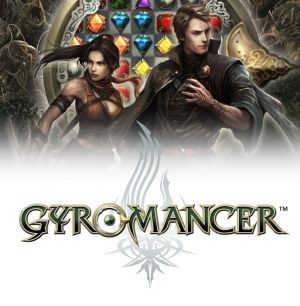 Gyromancer is what you get if you take a Puzzle Game by PopCap Games and embed it in a Role-Playing Game by Square Enix (and add just a dash of Pokémon for good measure). It was released in 2009 for Windows PCs and Xbox 360.
Advertisement:

Gameplay consists of moving along branching pathways until you run into a monster, then fighting it with a chosen monster of your own. This is done by playing a game much like Bejeweled Twist (by one of the co-developers), in that you have an array of coloured jewels on the screen and can twist any set of four in a clockwise direction. Line them up and they vanish, with new ones falling to replace them. As you move, your monster and the enemy monster both charge up their attacks (at different rates depending on just what you're doing). When they've charged, something happens - most typically, a jewel on the board becomes empowered, and by clearing that particular jewel, you either damage the enemy monster (if it's your jewel) or avert damage to your own (if it isn't). Various complications are added as you level up, as are new monsters for you to upgrade to.

Plot-wise, players mostly control a powerful mage named Rivel Arday, who has been sent by the King of Yshmea into a vast, old forest after a group of rebel knights who killed a Count. Rivel is joined by Laska Terrado, a ranger assigned to help him. Their opposition is led by Qraist Kingsley, a renegade knight who proclaims the kingdom to be corrupt and oppressive, and casts himself as a liberator. The forest itself is controlled by a powerful being called the Lord of the Wood, who has his own interests.