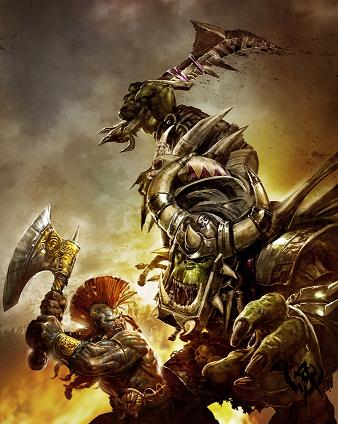 This is the least epic thing you will see from this franchise.
"Prepare thyself to enter a world of daemons and vile sorcery, of battle and death, of violence and of madness."
"The fate of the world, be it damnation or salvation will soon be decided. This is a world of eternal war and fleeting glory. This is the world of Warhammer."
"The gods of strife shall feast upon this day, and every day hence, until the end of time."
— Excerpts from the introduction to the 8th edition rulebook
Advertisement:

If you were looking for a character who uses a warhammer, that's Drop the Hammer (though the setting certainly isn’t lacking in this).

The uninitiated might think that Warhammer wasn't all that bad and was a heroic fantasy land on its way to getting better — that's right. There were just a few small problems like delusional (or worse) madmen empowered by the Dark Gods to increasingly frequently lead crusades reducing the world further into hellish misery and incorporate it into the REAL hell. Then there were the rampaging hordes of Greenskins, both Orcs and goblins, scarily psychopathic aliens infesting everywhere existing only to joyously, brutally and (with known exceptions) mercilessly fight, destroy, enslave, kill and in the case of goblins malevolently torture every innocent creature they could find — and the Greenskins were the comic relief in this setting. If you thought things would get better after that, that's just two of the usually gray forces inhabiting the world, which only survived as long as it did because of the eternal sacrifice of some Elven mages imprisoned in their own spell, maintaining it forever to keep the forces of Chaos from overwhelming the world like they almost did in ancient times and nigh-inevitably did anyway. But it really could have been saved if only those tasty... uh... good-willed denizens of it would have heeded wisdom!

The darkly humorous and bleak feel of the setting and game was what set it apart from the plethora of other similar fantasy universes. If you were to combine equal parts J. R. R. Tolkien, Michael Moorcock's Elric, Conan the Barbarian, Dungeons & Dragons, A Song of Ice and Fire, Monty Python, Berserk, and Terry Pratchett's Discworld, with a little H. P. Lovecraft for good measure, then you would have found something similar to Warhammer.

There is also a science fiction tabletop miniatures wargame set in a universe having much in common with WHFB: Warhammer 40,000, generally known simply as "40K". Think of it as Warhammer in space, though it has grown over the years into a distinct and very different game, and has become much more popular than Warhammer, at least in the United States. One fan theory holds that the Old World is actually a planet in the WH40K galaxy, but cut off by warp storms or otherwise isolated. Some official GW merchandise has supported this theory, though it remains non-canon.

By the way, if you're reading this page and thinking you might add a few references to that other Warhammer game IN SPACE and how it's darker/bloodier/larger in scale, don't bother.

The setting had a few computer games, among them Warhammer: Shadow of the Horned Rat, Warhammer: Dark Omen, Warhammer Online and Warhammer: Mark of Chaos, which met with varying reception, and a large number of novels, such as Warhammer: Time of Legends, Drachenfels and the Gotrek & Felix series. There is also an FPS-ish game set in the End Times setting, appropriately titled The End Times: Vermintide, and the beloved Total War: Warhammer series. Warhammer has also given inspiration to non-RPG tabletop games, such as Chaos Invasion and Chaos Marauders. It also spawned a relatively long-running (and decently successful) Collectible Card Game simply known as Warcry, although the mechanics of the game were very close to the actual miniatures game.

Warcraft was also going to be a Warhammer game until it became Warcraft instead.

In 2019/20 it was announced, that a Soft Reboot titled Warhammer: The Old World was in development, a revisiting of the setting at an earlier point in its history, around 200 years or so before the End Times, and would be the Warhammer equivalent of the Horus Heresy: Age of Darkness game for Warhammer 40,000.