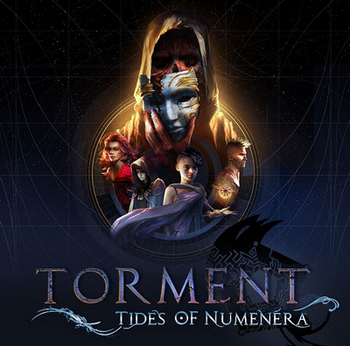 "What does one life matter?"
Advertisement:

Torment: Tides of Numenera is a Spiritual Successor to Planescape: Torment developed by inXile Entertainment. It is one of the many games-crowd funded via Kickstarter, released after a lengthy development on February 28, 2017. Unlike its predecessor, which used the Multiverse setting of Planescape, Tides of Numenera takes place in the futuristic Science Fantasy universe of Numenera, itself originally a Kickstarter project developed by Planescape supplement writer Monte Cook. At the time, it was the most funded game on Kickstarter with over $4.1 million raised, for a grand total of around $4.5 million, counting donations from other sources.

The game puts you in the shoes of the Last Castoff, the final link in a chain of lives abandoned by a being called the Changing God. The God was once a man who discovered a way to cheat death for centuries by transferring his consciousness into a succession of bodies, only to seemingly disappear after leaving yours. Now, as you are hunted by the Sorrownote Renamed from the Angel of Entropy to avoid religious implications, enemy of the Changing God, for reasons you can't even remember, you must find the Changing God again and with him the key to uncovering your past.

Not to be confused with Obsidian Entertainment's own Planescape: Torment spiritual successor, Pillars of Eternity, which was also crowdfunded and innovated the gaming engine which inXile licensed.

"We will miss you, tenderling. All of you."