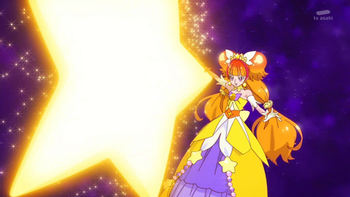 Related to Lunacy and The Power of the Sun, Star Power is magic fueled by, of course, the stars.

Generally comes in one of three forms: "Classical", "Lovecraftian", and "Aesthetic", "Classical" star power, derived from the traditional use of the stars and the motions of the planets to predict the future, is concerned primarily with fate and divination. "Lovecraftian" star power takes its cues from H. P. Lovecraft (of course) and evokes the unfathomable otherness and distance of the stars and whatever inhabitants they may have. "Aesthetic" star power uses stars as a motif and a visual for light, heat and energy, but doesn't take cues from either of the above sources.

Don't be surprised if your Star Powered-character refers frequently to constellations, perhaps referring to the influence of the Western Zodiac and other planetary bodies. As an offense, the stars may be helpful to Light 'em Up. Causing meteors to fall from the sky to strike your opponents is not out of the question for either type. On the opposite side of the scale, this may extend itself to power that comes from galaxies or even the entire universe.

Often the reasoning behind using something made of Thunderbolt Iron. If the person who uses Star Power is actually made of stars, see Celestial Body.

For related "space" powers, see Gravity Master and Reality Warper. Not to be confused with the webcomic Star Power or that other Star Power.