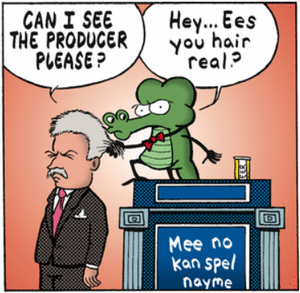 Even the easiest game shows require people to have at least a modicum of intelligence or common sense in order to compete. That's why an obvious way to parody the genre is to have contestants or panelists who are rock-stupid. Doing this has been a source of humor since the advent of the first game shows on radio in the 1920s.
Advertisement:

Game Show Goofballs is the idiot relation to the Status Quo Game Show trope. If the game show is of the deadly variety, these contestants may actually be Too Dumb to Live.

Please note that while there have been many instances of real people embarrassing themselves on real game shows in Real Life, this trope applies to In-Universe Examples Only.