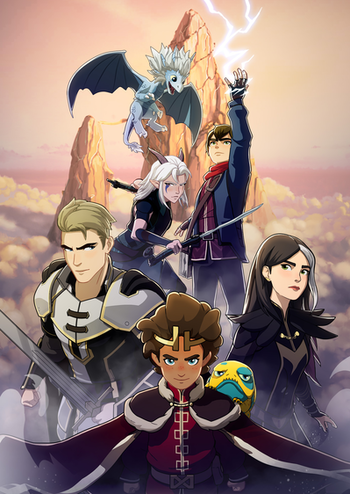 "Destiny is a book you write yourself."note Clockwise from top: Azymondias/Zym, Prince Callum, Claudia, Bait, Prince Ezran, Soren, and Rayla. Not pictured: Viren.
"Human princes, returning the egg to the Dragon Queen. That's the gesture that matters. That could end the war, and change the world."
— Rayla, "Through the Ice"
Advertisement:

The Dragon Prince is an American animated fantasy-adventure television series created for Netflix by Aaron Ehasz (a head writer and director of Avatar: The Last Airbender) and Justin Richmond, two of the co-founders of Wonderstorm. They are joined by Giancarlo Volpe as executive producer, who had also worked with Ehasz on Avatar: The Last Airbender before working on Star Wars: The Clone Wars. It is co-produced between Wonderstorm and Bardel Entertainment.

Long ago, the elves and dragons drove humanity out of their shared homelands in the east of the world after a human-created dark magic, leading to a millennium of war and bitterness. This culminated in Thunder, the Dragon King, being defeated and killed by humans; his only egg, the Dragon Prince, was lost in the attack. A few months later, the two princes of the kingdom of Katolis, Prince Ezran and his older half-brother Prince Callum, and the moonshadow elven assassin Rayla, who had been sent to kill them, discover the survival of the Dragon Prince. Together they set out to return him to Xadia, forging an unlikely bond on their epic quest to bring peace and unity to their warring lands.

It is the first entry in a planned franchise including:

Not to be confused with Dragon Prince, a book series released in the '80s.

Example of:
The Dying Walk