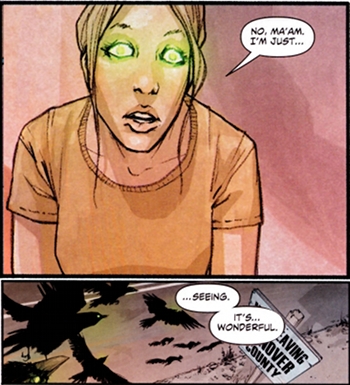 "... now why do I crave nuts and shiny things?"
"[Orell] can enter the minds of animals and see through their eyes."
— Mance Rayder, Game of Thrones
Advertisement:

This character doesn't just talk to animals and order them about; he or she can see through their eyes and experience the world through their senses. The range of this power goes from paranoia inducing to Superpower Lottery winner. On the low end, the character can see through one animal, usually a Familiar he or she is emotionally and spiritually tied to. On the high end, she can do this through more than one type of animal, or even several at once, making them close to The Omniscient. Depending on the level of control, she may be able to go beyond seeing through their eyes and create The Swarm out of local fauna.

Typically the animals are vermin or smaller, since their "small minds" are easier to control though bigger types aren't unheard of... but the tradeoff is they're harder to control. Depending on the type of bond, having one of these living listening devices killed may cause the character to faint from the feedback.

When the host is human or a sapient animal, this becomes Seeing Through Another's Eyes.