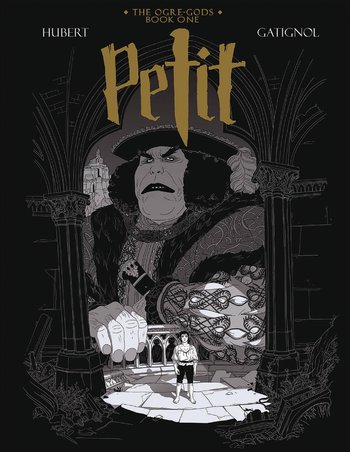 The Ogre Gods (Les Ogres-Dieux) is a a French Fantasy/Horror graphic novel series written by Hubert Boulard (author of Beauty) and illustrated in black-and-white by Bertrand Gatignol, with the tone and aesthetic of a dark and gruesome Fairy Tale, telling the saga of an aristocratic dynasty of giants ruling tyrannically over a kingdom of humans.

From a titanic castle situated on a mountain overlooking a great valley reign the Ogre Gods, a monstrous clan of giants served by armies of humans whom they kill and devour with impunity. The giant's rule is weakening however, as centuries of inbreeding has resulted in a physical and moral decline, with each generation becoming smaller than the last, increasingly brutal and depraved, and obsessed with restoring their former glory. When the Ogre King's youngest son is born scarcely larger than a human his father wants him killed as an embarrassment, but his mother sees in him the possible regeneration of the family, as he alone can mate with humans to breed new, healthy giants and break the destructive cycle of inbreeding.

The story is told across multiple time periods, with the present-day being interspersed with passages from in-universe history books detailing the history of the giants and their kingdom. Four volumes have been released, although the future of the series is uncertain due to Hubert Boulard's death in February 2020.

The Ogre Gods provides examples of: