Literature / Of Fire and Stars 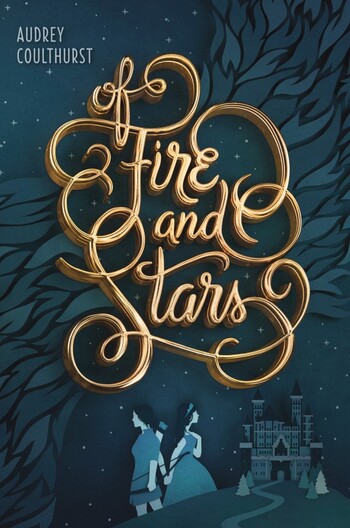 Princess Dennaleia of Havemont is sent off to Maynaria, as has been planned for her since she was just a girl, in an arranged marriage. There she will marry Prince Thandilimon, bringing their respective countries closer. However, when she arrives, Dennaleia finds herself drawn to his sister, Amaranthine (known as "Mare") a rebellious tomboy.
Advertisement:

The two become closer while Mare, a keen equestrian, is teaching Dennaleia how to ride. Dennaleia is not only soon troubled due to her attraction toward Mare, but her secret magic (which Maynaria forbids). Meanwhile, a violent plot to bring down the Maynarian government emerges that endangers them both.

Written by Audrey Coulthurst, Of Fire and Stars was her debut, published in 2016. A sequel entitled Of Ice and Shadow, followed in 2019 which continued Dennaleia and Mare's story. She's said a third novel which wraps the two's story up will follow someday.

Her book Inkmistress is set in the same universe, but unconnected with the plot of these novels.