Literature / An Officer and a Spy 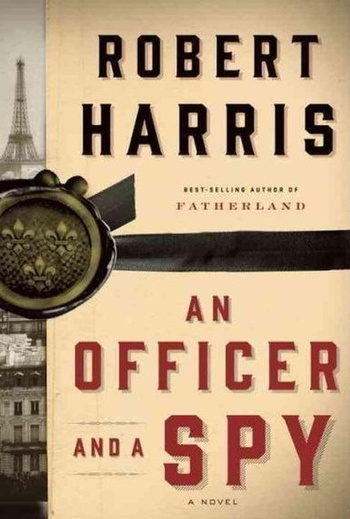 An Officer and a Spy is a 2013 Historical Fiction novel by Robert Harris.

It tells the story of the infamous Dreyfus Affair, the scandalous miscarriage of justice that rocked France around the turn of the 19th/20th centuries. It is told from the perspective of Col. Georges Picquart, an officer who was tangentially involved in the arrest of Captain Alfred Dreyfus on charges of treason and espionage on behalf of the Germans. After Dreyfus is convicted and sent off to Devil's Island, Picquart is promoted to head of Army intelligence. In that capacity, he soon discovers evidence that there is a second spy, Major Esterhazy, who is also passing information to the Germans. Picquart continues to investigate and, to his horror, uncovers more evidence indicating that Dreyfus was innocent and Esterhazy is the only spy. He then stumbles on to a massive coverup that extends to high levels of the French army and government—and those people aren't about to sit back and let Picquart expose them.

A film adaptation of the novel, directed by Roman Polański and starring Jean Dujardin as Picquart, was released in 2019. See also The Life of Émile Zola, an Academy Award-winning film that despite its name is really about the Dreyfus Affair.