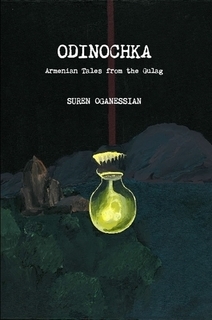 Odinochka: Armenian Tales from the Gulag is the debut novel of Armenian-American novelist Suren Oganessian.

Vartan Manukyan is a 29 year old prisoner in a Soviet Gulag in Siberia, who has just been given a death sentence; three nights in solitary confinement in a freezing prison cell. One of some 20 million prisoners who fell victim to Josef Stalin’s paranoia in the 1930’s. Odinochka delves into the mind of this single, forgotten prisoner, and unveils the story of a man haunted by memories of his youth, growing up in an orphanage in the Ottoman Empire during World War I, when the Turkish authorities began the process of genocide against their Armenian subjects. Caught in a siege in the city of Van, he and his young friends, foremost among them a little boy named Raffi who became like his little brother, were left with no choice but to participate in the city's defense; taking over menial work such as collecting used bullets to be recast, putting out fires or tending to the wounded as the adult men took to arms. The novel follows their attempt to make sense of the world around them in the harshness of the orphanage before the siege and during the turmoil of the war, and find an emotional escape through the stories they tell.