Film / The Life of Émile Zola 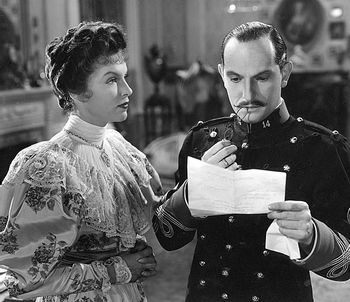 This is where things start going downhill for Capt. Dreyfus.
Advertisement:

, concentrating on the last four years of his life and his involvement in the infamous "Dreyfus Affair

". It was directed by William Dieterle and stars Paul Muni as Zola and Joseph Schildkraut as Alfred Dreyfus

Emile Zola is a poor young writer in the Paris of Napoleon III, sharing a tiny attic garret with the painter, Paul Cezanne. He struggles in poverty until he gets a job with a publisher, which allows him to marry his wife, Alexandrine (Gloria Holden). Zola continues to write scathing, socially conscious novels, one of which gets him fired from his job with the publisher after the government of France takes offense. Finally he writes Nana, a novel inspired by a prostitute he meets in a Paris cafe. Nana is a huge hit and makes Zola a wealthy man. The years pass, and Zola continues to crusade for justice and progressive ideals, but eventually he grows fat and complacent as a respected man of letters—until the Dreyfus Affair. Captain Alfred Dreyfus (Joseph Schildkraut), an officer with the army General Staff, is accused of being a spy for the Germans based on little more than the fact that he is Jewish. Dreyfus is convicted of treason and imprisoned. After a plea from Dreyfus's wife Lucie (Gale Sondergaard) and the insistence of other writers, among them the great Anatole France (Morris Carnovsky), Zola intercedes on Dreyfus's behalf, writing the famous "J'accuse" open letter, and risking his own freedom and career in order to save Dreyfus from life imprisonment.

See also An Officer and a Spy, a Historical Fiction novel and film about the Dreyfus Affair told from the perspective of Col. Picquart.