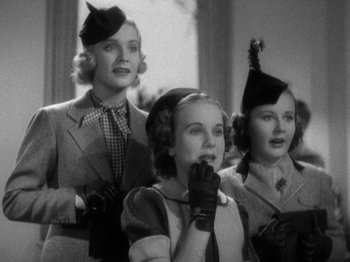 Three Smart Girls is a 1936 comedy directed by Henry Koster, starring Deanna Durbin (in her film debut) and Ray Milland.

The three girls are sisters Penny (Durbin), Joan, and Kay Craig. They live in a Swiss chalet with their mother Dorothy, Dorothy having been divorced from their father Judson for at least a decade. Dorothy still carries a torch for Judson, and she is left in tears when a newspaper reveals that Judson is engaged to be married to one Donna Lyons. The girls decide on the spot to sail for America and get their father, a wealthy businessman, to dump his girlfriend and get back with their mom. Through comic misunderstandings Kay gets a British lord, Michael Stuart (Milland) to try and lure Donna away from Judson, but Michael winds up falling for Kay.

Three Smart Girls was a huge hit that helped keep financially strapped Universal afloat. It featured Star Making Roles for both Durbin and Milland. Durbin soon became one of the biggest stars in Hollywood, featuring in a series of musicals for the next decade, while the success of this film boosted Milland from supporting player to leading man.

Durbin reprised her character in two sequels, Three Smart Girls Grow Up (1939) and Hers to Hold (1943). Not to be confused with Three Wise Girls, a completely unrelated 1932 film starring Jean Harlow.