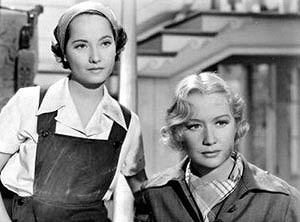 Karen (Merle Oberon) and Martha (Miriam Hopkins) in These Three (1936) 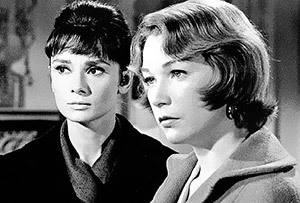 A classic—and, at the time, highly controversial—1934 play that was the debut work of Lillian Hellman.

The story concerns Karen Wright and Martha Dobie, best friends who are also headmistresses of a private girls' school in New England. Martha's ex-actress and narcissist aunt Mrs. Lily Mortar acts as an elocution and vocal teacher at the school, though she spends most of her time lecturing, showing off, and telling stories about the golden days. They couldn't be happier, especially with Karen about to wed her longtime gynecologist boyfriend, Dr. Joe Cardin.

One day, however, the school's resident bad seed, Mary Tilford, decides to extract revenge on Karen by spreading gossip that Karen and Martha are carrying on a love affair. Her grandmother, the town matriarch, leads the charge against the two, resulting in nearly all students getting pulled from school. Karen and Martha sue the Tilfords for libel; yet, even if they win, they really won't be "victorious."

The Children's Hour was adapted for the screen twice by director William Wyler. The first film version was a bowdlerized adaptation called These Three, starring Merle Oberon, Miriam Hopkins, and Joel McCrea and released in 1936. The second version, which starred Audrey Hepburn, Shirley MacLaine, and James Garner, was subject to less censorship by the time it came out in 1961.

The original stage production, starring Katherine Emery and Anne Revere, ran from 1934–36; during that time the play was blocked from being staged in both Boston and Chicago due to its content. A revival, directed by Lillian Hellman herself and starring Kim Hunter and Patricia Neal, played from December 1952 to May 1953 at New York's Coronet Theatre. Two other revivals have existed since: a 2008 one in Manchester and a 2011 one in London. In 1971 The BBC produced a radio adaptation of the play for its Saturday Night Theatre series.

The Children's Hour provides examples of:

Alternative Title(s): The Childrens Hour, These Three, The Loudest Whisper