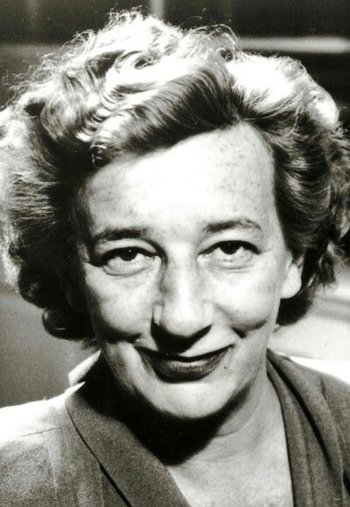 "I cannot and will not cut my conscience to fit this year's fashions."
— Lillian Hellman, before the House Un-American Activities Committee
"Every word she writes is a lie, including 'and' and 'the.'"
— Mary McCarthy on Lillian Hellman
Advertisement:

Lillian Florence "Lilly" Hellman (June 20, 1905 – June 30, 1984) was an American playwright and screenwriter. She achieved her greatest success writing dramatic plays for Broadway in the 1930s and 1940s.

Hellman was known for her strong left-wing views and activism. She was briefly a member of the Communist Party. During the Red Scare era, Hellman was targeted by The Hollywood Blacklist and refused to name names.

By the 1970s, Hellman was widely regarded as a hero for having taken a stand against the blacklist. During this time, she published her memoirs. One chapter of her 1973 memoir Pentimento formed the basis for the 1977 film Julia, starring Jane Fonda as a young Lillian Hellman.

In 1979, Mary McCarthy (no relation to the Senator) accused Hellman of being a Consummate Liar and Hellman sued for defamation. McCarthy produced evidence of Hellman's dishonesty. Most notably, evidence mounted that the "Julia" chapter in Pentimento was Based on a Great Big Lie. Hellman died before the issue could be settled in court.

Although Hellman's writing is still respected, the controversy over her dishonesty went a long way to overshadowing and tarnishing her prior reputation as an anti-McCarthyite heroine, leaving her with a mixed legacy.

Works by Lillian Hellman with their own trope pages include:

Other works by Lillian Hellman contain examples of: