Theatre / The Cat and the Fiddle 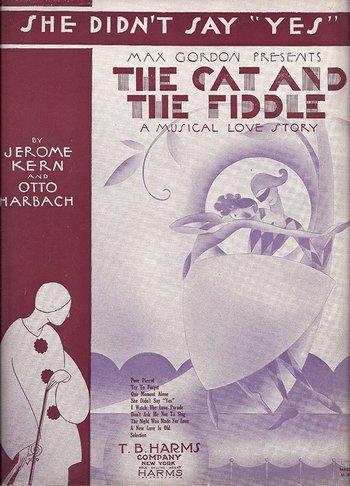 The Cat and the Fiddle is "a musical love story" with book and lyrics by Otto Harbach and music by Jerome Kern. It was first produced on Broadway in 1931.

The story begins at a quay in Brussels on a summer night that, as the strolling street singer Pompineau vocalizes, is made for love. There a Romanian, musical and handsome composer named Victor Florescu meets a young American named Shirley Sheridan, who is supporting her brother Alexander and his wife and dancing partner Angie on royalties from her popular songs.

Victor and Shirley exchange love letters for a few weeks until they unexpectedly cease. Victor is left with nothing more than a pair of her gloves and feelings of heartbreak. These feelings inspire him to compose a musical Commedia dell'Arte, The Passionate Pilgrim, with his friend Biddlesby to write the French libretto and the violin-playing Odette to act the part of the hopeless lover Pierrot. Unbeknownst to Victor, Shirley has moved into an apartment across the courtyard from him, and her jazzy piano stylings he hears as trash or, at best, a travesty of Edvard Grieg. Moreover, his producer, Clement Daudet, seems to prefer the up-to-date sound of her music over his neoclassicism. Though Odette protects Victor's artistic integrity through her influence over the show's backer, Major Chatterly, Daudet remains convinced that Shirley's music, together with Alex and Angie's dancing, need to be interpolated into The Passionate Pilgrim in order to turn it into a commercial success. Victor's worries about artistic fidelity become entangled with those of Shirley's romantic fidelity to him.

A 1934 Metro-Goldwyn-Mayer film version, starring Ramon Novarro as Victor and Jeanette MacDonald as Shirley, is faithful to the original score but follows a different plot.

Alternative Title(s): The Cat And The Fiddle