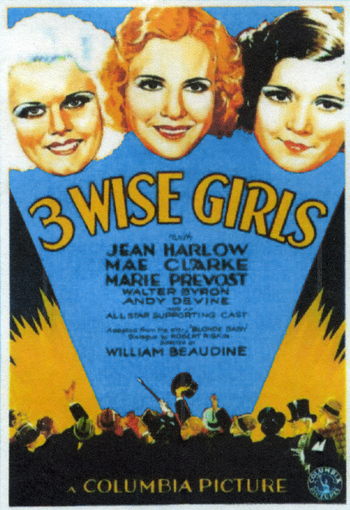 Three Wise Girls is a 1932 film from The Pre-Code Era. It was directed by William Beaudine and starred Jean Harlow, Mae Clarke, and Marie Prevost.

Cassie Barnes (Harlow) is frustrated about her hand-to-mouth existence as a soda fountain girl in Chillicothe, Ohio. She grows more frustrated when hearing about Gladys Kane (Clarke), another Chillicothe girl who went to New York and found success. Cassie goes to New York as well—and winds up working behind yet another soda fountain counter, scrounging out a poverty-level existence with sassy working girl Dot (Prevost). Sick of life as a soda jerk, she looks up her friend Gladys and finds that Gladys has a well-paying job as a department store fashion model. Gladys gets her boss to give Cassie the same job. Cassie soon discovers that while the modeling job pays well, Gladys's real source of income is as the mistress/kept woman to arrogant rich dude Arthur Phelps. Meanwhile, Cassie herself falls in love with Jerry Dexter, another rich dude, who is much less arrogant than Arthur but turns out to be just as married.

This was the first time Jean Harlow received top billing in a film. It was one of the last starring roles for Marie Prevost, a star from the silent days whose career went into terminal decline. Prevost died in January 1938 of starvation brought on by acute alcoholism, with only $300 to her name. Her lines in the movie about having to go hungry because she didn't have money for food became Harsher in Hindsight.

Not to be confused with Three Smart Girls, a completely unrelated 1936 film starring Deanna Durbin and Ray Milland.