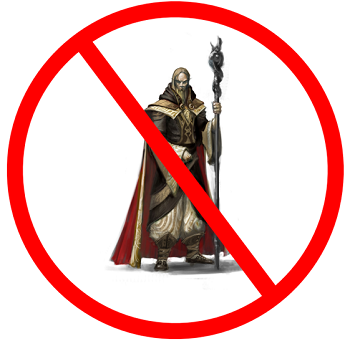 "We don't cast spells and you're not gonna do it either!"
"I see, at long last, what is wrong with the world — too many sorcerers."
— Karl Mordo, Doctor Strange (2016)
Advertisement:

A specific kind of empire or organization set in a world where magic is possible and/or the supernatural exists, whose agenda is against said magic and supernatural things. It forbids practicing magic, prosecutes mages and supernatural creatures, and so on.

Both versions of the Anti-Magical Faction are likely to wield some form of Anti-Magic or kryptonite. Their goal is often to impose a total Ban on Magic. Their ideology often contains a notion that Magic is Evil, but even if they're right, their extreme methods often make for Black-and-Gray Morality or Evil Versus Evil. If the faction employs technology, the result is likely to be The Magic Versus Technology War. Such a faction is the group equivalent of Does Not Like Magic.

May also be combined with Muggle Power and overlap with Cape Busters. Also tends to overlap with The Fundamentalist and Corrupt Church, especially in more modern works.

See also Mage Killer, Demon Slaying, Occult Detective, and The Witch Hunter. Any of these may be the founders/main members of an anti-magical faction.