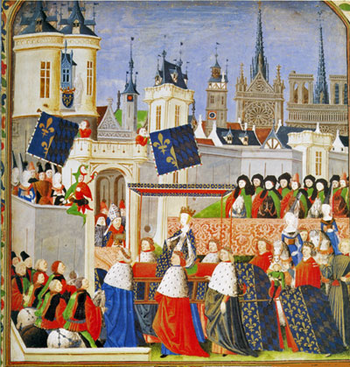 The Empire is evil. The Federation is generally good, often neutral and occasionally evil. The Kingdom, on the other hand, is almost always good. That being said, the Kingdom will typically be an ally of the good Republic fighting an evil Empire.

Often very small, sometimes just a single city-state or a Bright Castle with a few outlying villages, but it often has wealth or power beyond its size, usually large natural deposits of precious metals or Green Rocks, sometimes as a result of some form of Applied Phlebotinum. (May be somewhat larger in a Feudal Future.) Often containing large stretches of the Ghibli Hills and Arcadia, punctuated by the Shining City.

The Kingdom is the Damsel in Distress of nations, almost always being the one to fall under a witch's curse or be invaded by The Empire. Usually the standard setting for Fairy Tales, and when it's not, will often look as if it came out of a fairy tale anyway, even if it's in a sci-fi setting. If a kingdom is doing something evil, the king has most likely been deposed, or brainwashed, or replaced with an evil duplicate, or hasn't been paying enough attention to the Evil Chancellor's extra-curricular activities with the troops. Remember, a kingdom is only pure if the "true" monarch is in charge. The Evil Prince is not a "true" monarch, nor is the Puppet King, or the queen if she is cruel. Yet The High Queen will be serene and wise.

Any self-respecting Kingdom has a princess. She is usually benevolent and loved by the citizens, as well as gorgeous, of course and is commonly The Hero's love interest. Unless The Hero is, himself, the heir to the throne or a young and probably deposed king trying to save his own kingdom — in these cases, he will likely either marry a princess from another royal line or uplift a kindhearted peasant girl into an honorary princess.

One of the most common forms of Magical Land.

Curiously, writers (even particularly liberal ones) generally portray kingdoms as good and benevolent despite being absolute dictatorships. Perhaps it's because kings, officially owning literally everything, are difficult to bribe since they already own whatever you're trying to bribe them with. On the other hand, modern portrayals often hew closer to (modern) Truth in Television by showing the monarchy as more ceremonial while elected officials run the actual government.