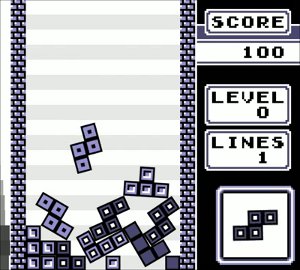 Oh, Crap! But it's okay, we can still win this! Maybe ... hopefully ... oh, who are we kidding?
"Go home, Tetris, you're drunk."
—Many comments on Youtube
Advertisement:

Created in 2010 by the fellows of StabYourself.net, creators of Mari0, and is now in its second incarnation, Not Tetris is ... well, not your average Tetris clone. Sure, it looks like Tetris, and it sounds like Tetris, but it also incorporates a full Physics Engine: Pieces can move and spin freely in a full 360 degrees, and if it lands at an angle it will tilt and fall over, making the pile difficult to stack in an orderly fashion, and even more difficult to clear a line — it's almost impossible to play like standard Tetris.

The game is available for free

under an open-source license.