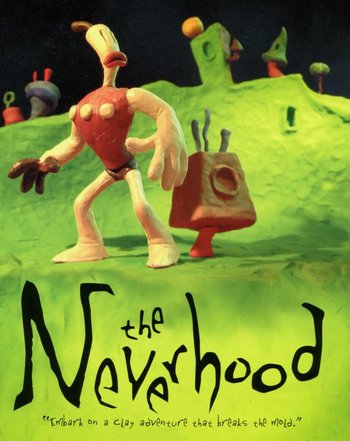 Yes. The adventure to break the mold.
The Neverhood is part of the creative issue of Doug TenNapel, creator of such games as Earthworm Jim. It is a claymated puzzle adventure Point-and-Click Game starring Klaymen, who wakes up in a locked room with no knowledge of what he's doing there or where he came from. There are very few other characters, and for most of the game Klaymen is alone, but fairly early on you begin discovering videotapes, apparently some kind of weird fairytale narrated by one Willie Trombone, the same person whose letters keep showing up in your mailbox...
Advertisement:

A PlayStation port of The Neverhood was released exclusively in Japan, under the title Klaymen Klaymen: Neverhood no Nazo, where the game became unexpectedly popular. This eventually led to an unofficial Gaiden Game, Klaymen Gun Hockey, made by the the Japanese publishers, River Hill Soft, and not released outside Japan.

The game's developers, also known as The Neverhood Inc, produced two other clay-animated games for the PlayStation before disbanding: Skullmonkeys, a sequel to The Neverhood but in a different genre, and the Fighting Game BoomBots, unconnected to their other games aside from the presence of Klaymen as a Guest Fighter. Years later, the game's Spiritual Successor, Armikrog, was released on September 30, 2015.

Many years later, the original creators came back together to create a sort of reboot (maybe; it seems, in fact, to have very little to do with the original): Return to the Neverhood, a comic and album, both of which can be bought (digitally) here

. There is also a short fangame by Denis Galanin aka "mif2000", which was originally intended to be the first episode of a series; it can be downloaded here

Willie know that once you know these tropes, then you know what to do! Listen, I tell you...