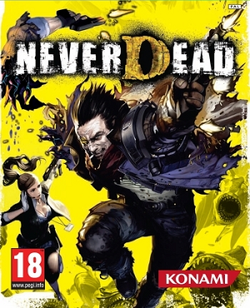 Elation through Mutilation
Trapped in this "no man's land"
Where angels dare to tread
Forever banned to the realms Of the Never Dead.
— Megadeth
Advertisement:

Bryce Boltzmann is an ugly, bad-natured bum with personal habits that would make a rat vomit. He's inept at his job, his partner is more like a parole officer and he uses self harm to escape his problems.

He's also a demon slayer with a murder-boner for the Devil King himself, a master gunfighter and swordsman, and mankind’s only hope against the coming apocalypse.

Never Dead is a linear Third-Person Shooter developed by Rebellion and published by Konami. It follows Bryce as he slaughters his way through hordes of demonic minions on the path to the Demon King Astaroth, as well as revealing the cause of his immortal predicament through flashbacks. Bryce is truly immortal, without need to breathe, eat or wash (although the latter is largely a personal choice), and when gorily dismembered he merely needs to reacquire his limbs by hopping, crawling or rolling over to reattach them. Given a few moments he can even regrow his entire body from his head alone, but this does not make him indestructible. His enemies can digest his head into immortal, inert ooze given the opportunity, trapping him in a conscious, agonized state for all eternity without respite.

To prevent this he wields a massive collapsible sword and any guns he can get his hands on, brings down the environment on his foes heads and constantly evolves new uses of his abilities to crush the endless hordes of abominations that confront him.

What results is The Suffering meets Death Becomes Her.

Panned at release by most review outlets in January 2012, most agreeing that it was an amusing story but a mediocre game, Neverdead is available on PS3 and Xbox 360, and provides hours of goofy dark humour, giddy ultra-violence and snarky dialogue.